Question: Have You Made the Switch to LED Bulbs? 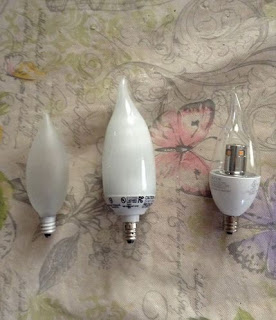 Since my home does not run on solar power, the use of unneeded electricity is not something I like. I went around the house and realized that I still had many incandescent bulbs still in use. I replaced them with some CFLs I already had, and I started to get LED bulbs too. Now I won't get anything but LED in the future. A lot of people don't want to get them because they are a tad more expensive (but not as bad as they used to be) at first, but they can last about two decades and use less energy than even CFLs. They are certainly are the light bulb of the future.

Does your house still use energy-inefficient light bulbs?
Posted by Adam at 2:00 PM

I've still got a few spots that I need to switch out.

We still have a few but working on replacing them all.....this is a good post, Adam....one to remind us to pay attention to such things as energy efficient bulbs. These things tend to slip our minds. Thanks

I've been wanting to replace the bulbs in my bedroom with LED, but when I purchased some, they didn't fit with my light fixture. I was sort of discouraged and had forgotten to check if they made different sizes.

Nope, and won't. Supposedly they are bad for you if they break and such, not sure on that. But they do increase bluelight and screw with sleep patterns, scientific fact, so screw that.

Or at least scientific fact until they change their minds lol

I do I find them brighter, but I should get into LED more.

Yes, we only have the newer LED bulbs.

I have not had to change a light bulb in ages due to using the LED, To me,they are cheaper in the long run.

can you help me with my collaboration and CLICK HERE pls ♥

Lowinging power costs here is encouraged by the government.
At one stage getting these types of fittings were discounted
for purchasing. Maybe still are?? - I have quite a supply of
replacement fittings.
I have similar light fittings - as shown here - in my apartment.
However power (electricity bills) here would knock your socks
off with the costs! Horrendous is the best word to describe it.
Far far higher than US costs.
Cheers
B J Hunnicut (Colin)

I'm slowly converting as I replace lights. Have a good one, Adam!

We replaced ours years ago. I don't think they last as long as they claim, but I do like how much brighter they are.

We are switching over as they burn out. You are smart to go ahead and do it. xo Diana

We are also converting to LEDs. They don't flicker and are OK in places with moisture.

We can'[t buy the old type bulbs anymore, haven't been able to for a few years so we have LED mostly.

No more incandescent bulbs in this house. We have replaced all of them with energy-efficient ones.

yep, all the bulbs in my house, to the last one, are inefficient and I'm proud of it!

I am slowly converting.