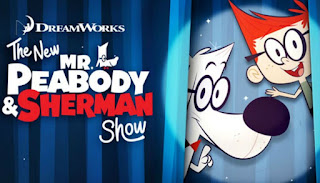 I remember liking the original shorts of Mr. Peabody & Sherman during re-runs of Rocky & Bullwinkle. They came back with a new movie last year which was actually pretty darn good. Now Netflix has a new series which all about the talking genius dog, his adopted son, and their wacky time traveling adventures. 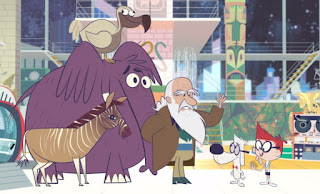 The show starts out like a variety show from decades ago. There is a "live auidence" of drawn cartoon characters who laugh and clap at the skits. Many of the jokes are just from Mr. Peabody & Sherman, though they do skits with original characters and figures brought from history's past like Charles Darwin and Harry Houdini. 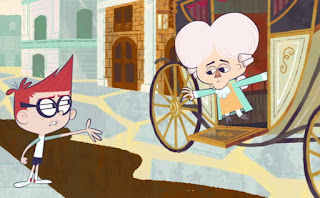 The main core of each episode is a time traveling adventure. One of them includes trying to get Marco Polo to try pasta so he could bring it back to Europe. They also help Napoleon Bonaparte during the Battle of Waterloo. And they also aid Wolfgang Amadeus Mozart with his musical career as a young boy. 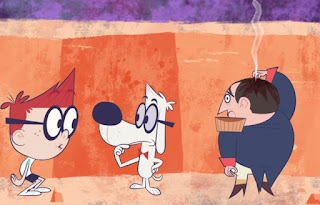 I had never been so disappointed with a reboot of a classic cartoon series since Ren & Stimpy's horrid cartoon series for Spike in 2003. I've seen a lot of animation being safe enough for kids to watch but still smart enough for older people to enjoy. The humor in this one is juvenile at best, and the "history" in this show is pure non-sense. I could only tolerate three episodes of this garbage. Most Netflix exclusives are pretty darn good, this one was a horrible mistake.

My daughter loved this cartoon when she was a kid.

Sounds you don't like this so much, I never heard about this cartoon.

I also enjoyed the cartoon version when i was a kid.