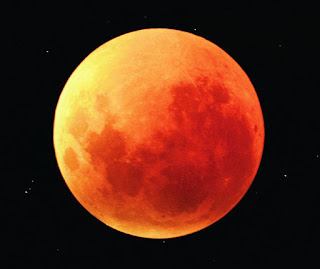 Especially living in the South, I often hear a lot of garbage spoken by the "religious right". One of them was the prediction that a tetrad of red moons (which is caused by the same thing that causes a sunset to look red) which fall under Jewish holidays would mark the start of the "end times". Now it's been about a week since the tetrad was over and I don't see Jesus or four horsemen and nothing has really happened since then. I'm 27 years old and I lived through at least a couple of supposed "end of the world" events. It's 2015, you'd think people would be smarter than to firmly believe these things are actually real and move on to the next one a few years later.
Posted by Adam at 8:00 PM

Email ThisBlogThis!Share to TwitterShare to FacebookShare to Pinterest
Labels: Christianity

Oh God you're game Adam!!!
Well reverse your age numbers and you have mine, and so far no "Four
Horsemen of the Apocalypse" have appeared to grab me for damnation.
Then again as I can ride a horse still I imagine pretty well, I'd out gallop these
demons!
I say no more - the wrath of the "Tea Party" will probably laser me from across the
Pacific!
Cheers
B J Hunnicut ie: A nom de plume
Colin

I'm about twice your age and have lived through many more 'end of the world' predictions. Still waiting...

So pathetic that people buy into this crap these days

I am thinking it's not a good idea to TRY to predict the END.....no one has a clue.

All I know is that when I see a giant comet entering Earth's atmosphere I expect to have a big circle of chocolate on my mouth because I'll be eating like there's no tomorrow.

Lots of ends of the worlds, eh?