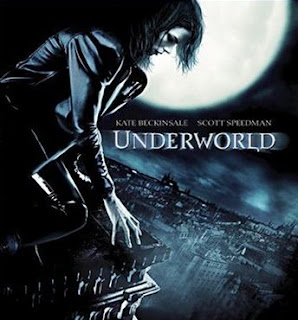 Underworld is a series I had heard a little about but never really gave much attention to until now. I didn't know much about it, and I think this may be the first movie I've seen that has Kate Beckinsale in it.  I didn't know what to really expect, but I was a little shocked to learn that this movie had been a critical failure back in 2003. 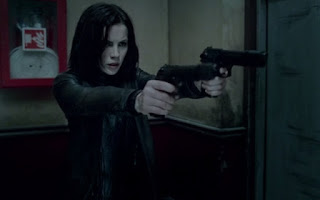 The movie is set in the modern day with the leading character being a female vampire named Selene. For hundreds of years, her vampire "family" has been at war with lycans (werewolves) where the vampires had been winning. That is until Selene spots some lycans going after a human male for some strange reason. 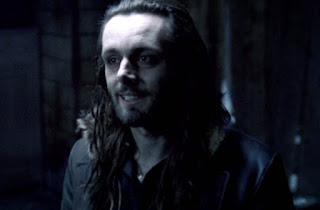 The human's name is Michael Corvin, and an extremely powerful werewolf thinks he is the key to something the world has never seen before. Selene manages to save Michael but she can't protect him forever. As he's not safe from the vampires either, and even Selene can't trust some of her own people. 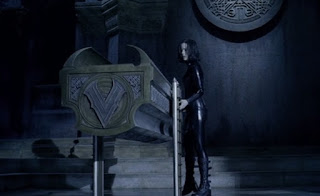 I ended up liking Underworld more than I expected. I can see why it has acquired a "cult following" after critics booed it in theaters. Twilight might have made vampires and werewolves less cool, but I thought the war between them in Underworld was decent enough. Some of the story could have been better, and some of the fights were just plain dumb. Though I still think it's a good movie, and I'm interested to see the sequel.

Wasn't bad, Kate Beckinsale is worth looking at haha second is about the same, never watched the other 2 though.

Not familiar with this one.

I remember this one! Glad it pleasantly surprised you.
~Pau
www.lilbitsofchic.com

Never heard of this one...

Never saw it. I might check it out some day when I have nothing else to watch.

I never even heard of this movie-glad you enjoyed it as much as you did.

Glad you trusted you won assessment!

I saw the first one, possibly the second one too but I'm not sure... and after that I stopped

Kate Beckinsale... She's a knock out!