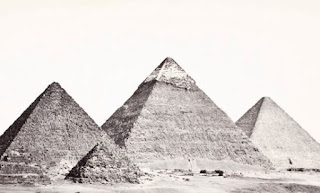 Someone recently asked if GOP presidential candidate Ben Carson still believed in a theory he spoke about at a religious college in 1998, and he said he still stood behind it. He believes that the Biblical character Joseph (Genesis) had stored tons of grain in the Egyptian pyramids. Many societies all across the world had built their own pyramids (not just Egypt), but I never heard a theory that any of them were to used to store food. If Ben Carson can't get the past right, what makes people think he has the right ideas for the future of our country?
Posted by Adam at 1:00 PM

Just goes to show that doctors can be ignorant dipshits too!

And this Bloke is a 2016 Presidential candidate???
Christ what next will these aspiring Presidents come up with next???
Scary for the rest of the World - I bet this gave the Egyptians a good
laugh.
B J Hunnicut aka Colin

Hi, Adam....hope your day is going good...I am biting my tongue so hard, it just might bleed.

It would have been stupid to spend twenty years building silos to store grain. Carson is nuts.

What an odd thought!

It is really strange he believes the pyramids were used for storing grain! Good thing a U.S. President doesn't necessarily really have to know too much about pyramids to govern this country. Reminds me of Dan Quayle's "potatoe" , and how he was considered an idiot by some because he apparently wasn't good at spelling. Carson is very intelligent/knowledgeable in some ways (as a brain surgeon for example); he may not be so great in others. Voters just have to decide whether he has more good or more bad points.

You, young Bethany, are very level-headed and I admire your sensible way to look at this kind of thing.
xo bj