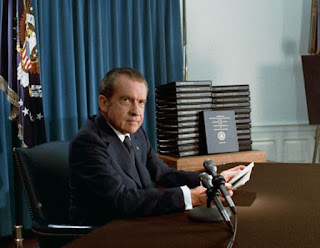 During a state visit to Canada, President Richard Nixon met with Canada's Prime Minister Pierre Trudeau. The Prime Minister's infant son Justin was there and Richard Nixon gave a toast "Tonight we'll dispense with the formalities. I'd like to toast the future prime minister of Canada: to Justin Pierre Trudeau". Justin Trudeau became Prime Minster of Canada in November of 2015.
Posted by Adam at 12:00 AM

Who would've thought, eh? Maybe, that was Nixon's talent:P

Hahahahahaha, that's funny! You know, when Nixon's secret tapes were made public, it seems that in private he called Pierre Trudeau an asshole. To which Trudeau shrugged and said to the media, "I've been called worse things by better people."

Well at least he got that right!

Neat fact, I enjoyed the comments too!

I agree with Mama Zen...really cool

Interesting fact! Thanks for Sharing!

We are very happy with our new prime minister. Justin also met with the queen when he was a little boy.