Fact of the Day: Not a Witch 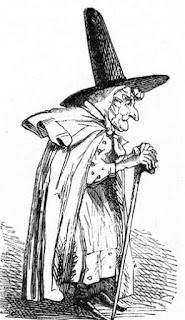 In the 2010 Senate race for Delaware, Republican nominee Christine O'Donnell claimed that she was not a witch after comedian Bill Maher brought up a quote from something she said in the 1990's about once "dabbling in witchcraft". She lost the general election with only 40% of the vote.
Posted by Adam at 12:00 AM

Email ThisBlogThis!Share to TwitterShare to FacebookShare to Pinterest
Labels: Delaware, fact of the day, republican

Adam
Aren't you treading on thin ice with all these Republicans that you are lampooning?
The Democrats aren't coming up with much better in the 2016 candidates stakes either.
It is a bloody nightmare for the rest of the World - see if you can pick a sensible person who still has feet on planet Earth. Surely out of a population of 318.9 million
there must be someone that the USA and the World could be proud of.
So far - Zilch! Trump is a clown - reminds me of Russian (post Soviet era) Boris Yeltsin. Can you imagine if in 2016 we, in the World - free or otherwise - had as leaders Boris in Moscow and Donald in Washington - I wonder who would hit the red
nuclear button first, thinking it was a lolly? The mind boggles at that prospect.
B J Hunnicut

How someone could ever feel the need to underline they are not a witch...of course not, since these don't exist!

That's one thing about running for political office--*everything* (and often a little bit more) about a candidate's past is revealed. A person running for office needs to be good at responding (or not responding) to all the accusations with wisdom and tact.

When I was a little girl we bought a house from a family. The mother was very old and her daughter did not really want to sell the house before her mother died because then the mother would get the money from the sale instead of her--she had gotten the last people who wanted to buy to back out half way through the deal and consequently got some of their money (the down payment?). I remember telling her daughter (The granddaughter--who was about my age) that I was a Christian and when I asked if she was, she said her mother was a witch and was training her to be one. Well, that was completely believable, but years later when the daughter came back for a college project to see the house she lived in she couldn't even remember the incident and said they must have been trying to scare us. It didn't work. :)

Seems that everything you say comes back to haunt you when you're in the public eye.

Have to always watch what you say

That's EXACTLY what a witch would say.

maybe if we replace W with B in the same word? No?