Fact of the Day: Robert Shurtleff 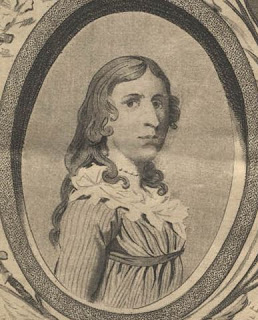 During the American Revolutionary War, a soldier named Robert Shurtleff was given the nickname "Molly" as he never seem to have any facial hair. He was wounded during a battle in the thigh but decided to not tell a doctor about it. However when Robert was struck with fever, a doctor realized that Robert was a woman. A woman named Deborah Sampson had been dressed like a man to fight in the war.
Posted by Adam at 12:00 AM

Email ThisBlogThis!Share to TwitterShare to FacebookShare to Pinterest
Labels: american revolution, fact of the day

That's understandable since women weren't allowed to do much of anything back then. I guess if a woman wanted to do something like that she would have to dress as a guy and fake it.

imagine if we had no facial hair and no need to shave! Bliss

Must have really wanted to go to war..amazing.

Oh my gosh! Why is there no movie about her? That's a pretty incredible story!

A not uncommon story in LGBT history. "Molly" is an old slang term that was used before "faggot" became common. "Nancy" or "Nancy-boy" was similarly used.

Must have really wanted to help out indeed

She wanted to be involved!

Now that's a heroine to write about! My kinda gal!

"Robert" is hardly the first female to dress as a male and
go into battle. Christ you'd think this was first person to do such a thing!
Hardly warrants a bloody movie!!!
B J Hunnicut

A neat and not-so-well-known story. Her story reminds me of Joan of Arc, who also dressed as a man, so she could fight. After the war, Sampson went on to marry and have three children.

Frankly, I would LOVE to see a movie about her.