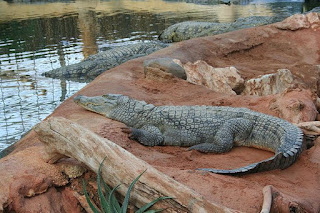 Officials in Indonesia want to put some of their death row inmates on a island surrounded by crocodiles who would be their guards. They say it's because crocodiles could not be convinced to let the inmates go. While I can see many variables of how their plan could go wrong, but I admire their creativity. I just don't think these inmates are going to get much family who's going to be willing to visit them.
Posted by Adam at 12:00 AM

Indonesia is our neighbour here.
Bali is like an outer suburb of any Australian city you wish to pick

Might be a good idea, but impractical to the extreme.
This has not been reported in any Australian paper - those of the left, those
of the right.
B J Hunnicut aka Colin

And they'd only have to pay them in raw chicken legs.

LOL, Adam! We should try that here, might be cheaper!

Man, those Indonesians are ruthless! That's one place you do NOT want to break any laws!

This is going to be the most interesting thing I run across today :)

Oh wow! That is an innovative idea. It would be a real task to break prisoners out of an island surrounded by crocodiles. However, I am certain that with proper training for the endeavor, a special operations force could do just that...at least they always do in the tv shows. The episode "Smart Fell on Alabama" from the 1960s tv series Get Smart is the first to come to mind with Smart stealing a codebook from a carefully guarded island surrounded by (if I recall correctly) alligators, but the "fortress island" theme does recur throughout various detective-style tv shows.