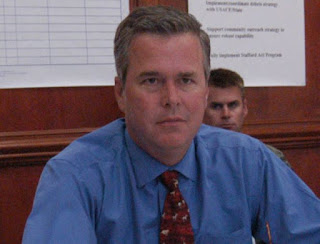 Despite Pope Francis calling for the end of the death penalty in all parts of the world, Jeb Bush (who happens to be Catholic) wants to "reform" the death penalty. He expressed frustration of how it takes decades and many court appeals to get it done. Except there have been many people on death row who were later proven innocent, and a lot of people like me don't exactly think that the government has the right to end the life of someone who will never leave prison. Jeb say it isn't a deterrent anymore, which is somewhat right except murderers never hope to get caught. Funny how Republican fear "big government" yet want policies that creep towards fascism.
Posted by Adam at 11:00 PM

Adam
I don't believe Jeb Bush was born a catholic, he married one and converted.
Anyhow he is a Bush but I believe he has a few more brains than his older
brother but that wouldn't take too much.
I agree the death penalty should be abolished - some have been executed and then
years later been found innocent.
B J Hunnicut aka Colin

sure, but only if they try it out first on those who vote for it :)

I believe that the death penalty should be abolished.

Republicans grow the government just as much as Democrats.

A lot of these trials do go on for way too long; I'm sure it is painful both to those wronged and to the one who did or did not do the wrong. I would like to see more efficiency somehow.

Is life-imprisonment more humane than the death penalty? I wonder. I guess with imprisonment there is always hope of getting out someday, but I don't know if I could stand it. (My blog title is Liberty or Death.) I guess I better just stay a good, law-abiding citizen, so I never have to worry about it on a personal level.

I do know that I would much rather prefer a firing squad to the electric chair or lethal injection. The stories of botched executions are horrific...and definitely inhumane. I̶'̶l̶l̶ ̶t̶a̶k̶e̶ ̶t̶h̶e̶ ̶f̶i̶r̶i̶n̶g̶ ̶s̶q̶u̶a̶d̶ ̶a̶n̶y̶ ̶d̶a̶y̶. Ooops..well, I didn't exactly mean that! ;)

I am in Canada so we don't have the death penalty, but we used to a very long time ago until it got abolished. The problem with life imprisonment with those who ARE guilty, such as Ted Bundy, is that there is the risk of them escaping, only to kill again. Some of these guilty prisoners end up taking their own life before the government does it for them.