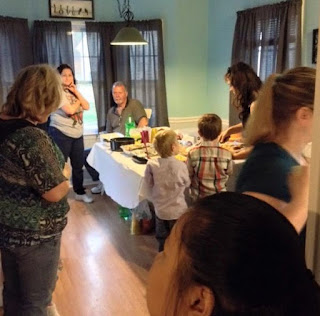 We had went to two Thanksgiving dinners this year. The first was at my brother Zach's house. Most of the guests were on his wife's side of the family like usual. We've met several times so it doesn't fell that awkward anymore. 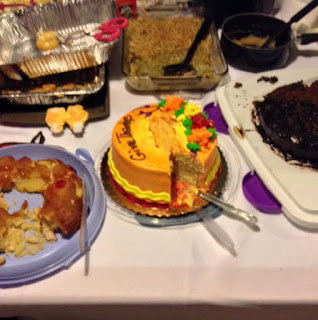 They told everyone to bring one dish, so I brought a cake. I meant to take a picture of it before it got cut, but it had two pilgrims on the top. A local supermarket makes a cool unique Thanksgiving cake every year, and this is the third cake we've gotten so far. They've all been good. Last year there were so many desserts that not many people got it. But there were less this year so about half the cake was gone by the time we left. 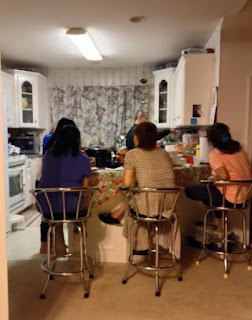 We then arrived at my in-laws house. It was a very small gathering. Just her mom, dad, grandma (and her grandpa showed up extremely late), her brother, and her cousin Katelyn. It's the first time I've been to two in one day, and it's weird because you don't want anything to eat by the time you get to the 2nd one. 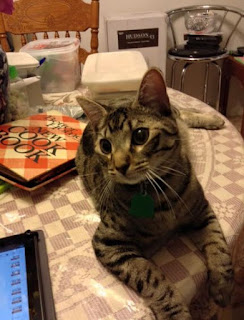 Johann the cat was there too. I was surprised he wasn't trying to climb on the counter-top and getting into the food. He did try to claw Katelyn's hair as if it was string.
Posted by Adam at 8:00 PM

Sounds like a great day. And lots of food! Maybe just a tad too much. This is what it's like for us, too, whenever there's a holiday. We end up visiting both sides of the family and by the time we get to the second one, we are not hungry anymore.

I am so glad we cut down to just one. We did 2 for about 10 years before I had enough. Glad you were able to spend the holiday with so many loved ones, though!

Ok, the kitty is weird becaus ewe have to close the door everytime we have a meal XD
hahah
Oh, I wish one day I could "live" a traditonal and in family dinner like these ones... they sound fun to do!
All the best,
Valentina

That's excellent you and Daisy could attend two places for your Thanksgiving meal.
It's was like that at Christmas time when my sons were babies, we all used to visit my husbands parents for Christmas dinner, then to my parents one and half hours drive for Christmas tea, which was a dinner! so full, but I changed it all around and everyone came to my place, much easier for me with two babies.

ahhh, Adam....you and Daisy are blessed to have so many people that love you and want to share holidays with. We were always the same way...2 feasts in one day...heavenly. Now, our parents and aunts and uncles are gone...I treasure the years we shared holidays with them....so will you, someday.

I remember experiencing two Thanksgivings back when I was recently married and its a taffy pull deciding which family you'll share the holiday with, so you go to both places.

Fabulous moments ! In my family, we celebrate Thanksgiving (we love American traditions !) ;)

Oh wow, that would be tough to eat two Thanksgiving dinners! Always do enjoy the leftovers though!

I had to cook for two days this Thanksgiving and that's with even my sister-in-law doing the turkey and bringing it over. I like Thanksgiving, but I'd sure like to go to somebody else's house sometime. I'm so glad you had TWO to go to. However, you must have been stuffed to the gills.