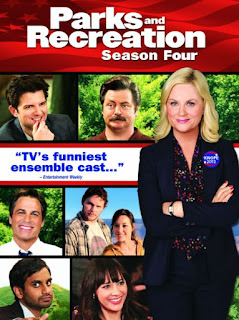 Parks and Recreation is a show my wife and I have been watching constantly. It's been the first series since Merlin that we watched without taking a real break. It's incredibly funny, so I haven't been able to object to it. 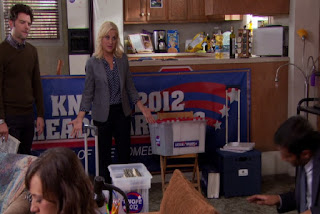 The season begins with Leslie Knope running for city council. She and Ben Wyatt have called their realtionship off since he's technically her boss while she's still Deputy Director of the Parks Department for Pawnee, Indiana.  But he still helps her run for office, along with the rest of Leslie's friends and co-workers. 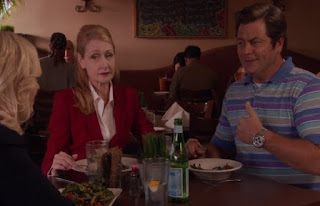 Ron's first ex-wife "Tammy One" showed up at the end of the last season which had Ron Swanson running for the hills. She finds him and tricks him into getting back together. All of Ron's friends/co-workers attempt to break them up. Tom Haverford and Jean-Ralphio Saperstein ask Ben for help in their new company. Realizing that they over-spend (e.g. big office space, models, and NBA players) and have no clients, Ben is in utterly shock that they haven't gone bankrupt yet. 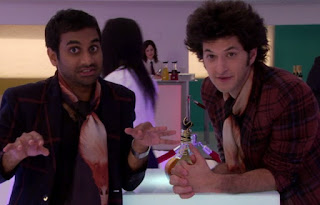 Overall the fourth season was pretty good but not quite as funny as the third. All the best characters are still there and remain very funny. I really liked Leslie's run for office and her relationship with Ben throughout the season. Like the rest, my wife Daisy and I have already started the fifth season of the show.

Never follow any TV series, but sure it is good to know the good list! Thanks for sharing!

It's a great show, even though i was traumatized by the loss of Little Sebastian.

A good show- that has won all kinds of awards! I love that you share your thoughts on different shows and movies here. xo Diana

Never watched it. Hardly ever watch television. Mostly just Netflix. I seem to like the British shows best.

I haven't seen this one. Looks like a fun one.

I tried watching a few of these on streaming and couldn't get into it. But then, I'm more of British Bake Off, kinda gal. Stuff along those lines.

I'm going to close my eyes and not really read it because I'm scared of spoilers. I didn't think I would get into Parks and Recs when I first started but heck I like it! nice sharing :)

I need to add this to my list. I hear it's a funny one!

Haven't heard of that series down here on our free to air TV..