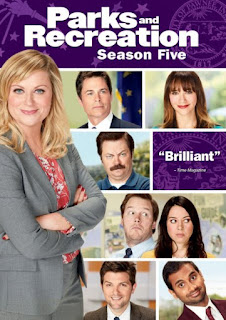 As I mentioned Parks and Recreation is a show my wife and I really have enjoyed and we've gone through five seasons when it seemed like we saw the first yesterday. Season Four wasn't quite as good as the third, but we still really liked it. I just had hope the fifth would not continue a downhill trend. 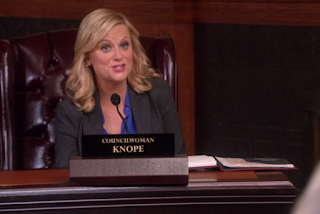 The season begins with Leslie Knope starting in her role as City Councilwoman for Pawnee, Indiana. While she is no longer Deputy Director for the Parks Department, she does stay devoted and spends a majority of her time with her old co-workers. Though running a city might be harder than she expects it to be. 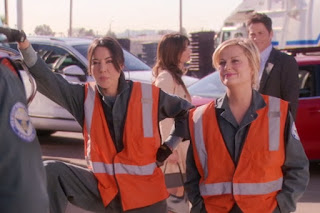 Leslie pushes for a lot of things to improve the city, and often does certain things to prove a point like showing that women can be equal to men. Now that they are no longer working at the same place, Leslie and Ben can freely date with no guilt. But their time will be split as Ben took a job in Washington D.C. to help the campaign of a congressman. 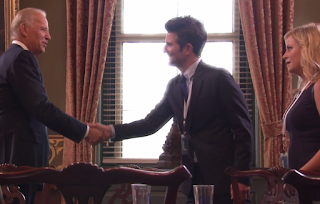 While it wasn't as good as previous seasons, both me and my wife Daisy liked the fifth season a lot. We've always enjoyed it as a super-funny comedy but I thought this season got a little too serious. Though we still liked all the characters as they all stayed funny.

Amy cracks me up and I liked it when she met the Vice President.

I'm glad you and Daisy are enjoying the series.

I've never seen it...not sure we even get it here.

You know, I think sometimes they just run out of materials and can never quite match that first "push" that was so funny in early seasons (of any shows, I mean). Glad you and Daisy liked it though- Hugs- Diana