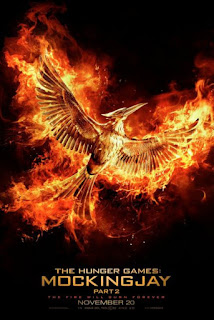 While I've never read a single book in the Hunger Games series, I've been a fan of the movies. I got my wife to see the first movie years ago and she became a bigger fan than me. She read all the books and really wanted to see the sequels. We saw the first part of Mockingjay last year and now it's time for the last film in the series. 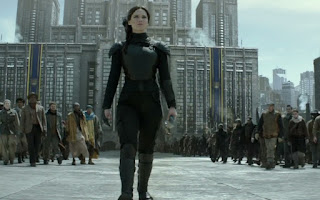 The movie starts with Katniss Everdeen recovering after a brainwashed Peeta tried to murder her. District 13 is desperate to strike President Snow's forces, but Katniss questions their methods. She even begins to doubt her friends who seem to lost a lot of their morals when they seek revenge against President Snow. 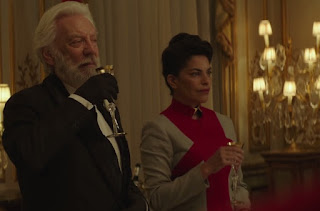 The evil dictator of Panem takes Katniss far more serious than he ever did. When Katniss and a team of rebels storm the city alone, he has traps waiting around every corner. Most of them resemble things that previous victors had experienced before. Leaving Finnick to nick-name their mission as the 76th Hunger Games. 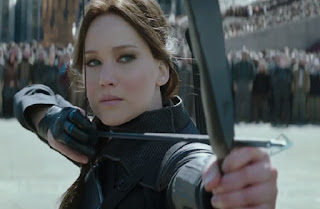 Overall I liked the final Hunger Games movie but I am conflicted. I lament that they have done a two-part movie and it didn't feel too perfect. Makes it seem like you paused and came back a year later to watch the rest. It certainly dulls the the movie from feeling too epic. Though there are plenty of exciting moments including a battle with "mutts" which is quite thrilling though doesn't make the story seem that realistic.

I enjoyed the first one and when it comes to Cable TV I'll look for the sequel.

I read all the books, which certainly helps. It fills in all the gaps in the movie, and there are always gaps! But I will watch this film at some point.

I agree with your rating. Happy Thanksgiving to you and your lovely wife.

The third book was my least favorite. I was kind of bored in pt 1 of Mockingjay. I do hope I like the finale.

I just saw the movie tonight, but I had only seen the first one, so it was a bit disconnected for me, but I did enjoy it.