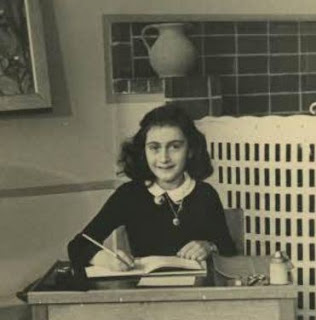 Anne Frank's father Otto had asked the United States government to accept his family as refugees. Like countless Jewish refugees during World War II, they were left stuck in Europe with many countries occupied by Germany. If the United States had allowed the Frank family to come to America, Anne would have been 86 years old as of 2015 and probably living in Boston.
Posted by Adam at 12:00 AM

I have the story of Anne Franks which I have read several times. Interesting.

That I did know. I think.

Yeah, not proud of that part of Germany's history!

Stinks indeed that he got stuck there, as with the many others too

The "could have beens" of history....sigh...I always imagine that in a parallel universe, these things would've happened.

That I did not know. Sad to think of the "what if"s.

I'm not proud that we turned away so many refugees during WWII, and that these people ended up dead. It's a black mark on American morality.

If... she would have made it till today, anyway, my friend. Don't you think?
The worst thing, I think, happened to the Frank family here in my country, The Netherlands, hidden in Het Achterhuis where they became victims of betrayal.

I had not heard that before. Thanks for sharing.

That's so sad. The U.S. has some shameful history during that time.

adam, wow. i hadn't thought of that, but i get what you're saying. it's messed up how some people are behaving. it's reminding me of history repeating itself, & i don't like it all. actually i think it's scary.

I saw the movie and it was a good one.

History repeating itself... I'd rather think it's people repeating history.