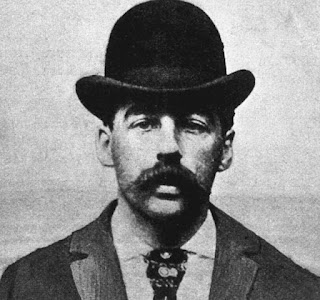 H.H. Holmes is considered to be the "world's first serial killer". Most of his victims were murdered in his hotel, and many of them were women who were tourists of the 1893 World's Fair. He confessed to 27 murders but many think that number could be as high as 200.
Posted by Adam at 12:00 AM

Omg, this is beyond scary, the horror!

Oh my goodness...what dreadful person he was..

Wow, he was sure a psycho path. Sure there were cavemen that killed a lot though. So maybe first modern day serial killer?

Maybe he was just the first serial killer who got CAUGHT.

Never heard of him. Scary thing is that, from what I have read when one of these people is caught, that they are all so normal on the surface.

It just goes to prove you can't trust people in funny hats.

That is sad. I don't understand how people get pleasure from hurting others.