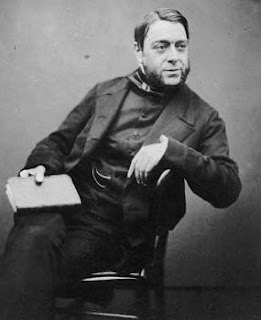 Years before Charles Darwin wrote On the Origin of Species, many devout Christians did not believe (or tried to make sense out of) geological findings that proved the Earth was by far older than what was written in the Bible. Philip Henry Gosse wrote a book where he suggested that fossils were never alive, but formed on the day of creation to make the Earth seem older. The book was called Omphalos (the Greek word for navel) as he believed the biblical character Adam had a belly-button despite never having a mother.
Posted by Adam at 12:00 AM

Poor old Phillip - gazing at Adam's naval. I'm surprised he had a photo of it - ha ha.
B J Hunnicut aka Colin

Gosse??? or better Phillip Henry GOOSE!
Apologies to the species of geese - domestic and wild.
B J Hunnicut aka Colin

That's probably why most people have never heard of this guy. lol

Oh gracious! This is so very silly.

I have never heard of him. He sounds as if he was a bit odd..

Wow, that was a stretch. Some people prefer the blinders.

even in his day, his book was considered a miserable failure.

People will conjure up a variety of interesting stories to refute evolution. They did back in this fellow's time as they do today.

You make me laugh Adam.

I bet Ken Ham has this book memorized.