Fact of the Day: Refugee Ship 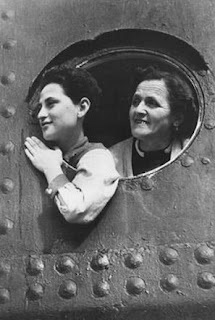 The MS St. Louis was a ship most famous for sailing 908 Jewish refugees out of Germany in 1939. The ship sailed to the Americas where refugees were refused both in Cuba, and in the United States. The ship was forced to sail back to Europe where the passengers were taken by various countries. However over 250 of these passengers did not survive the end of World War II as Germans had invaded the countries they had been accepted to.
Posted by Adam at 12:00 AM

They were strict back on those days. Imagining turing a ship back now!

These are very good informations!
I wish I could find more blogs interested in history hings :)

They sure couldn't catch a break

Canada turned away a refugee ship too -- don't know if it was this same one or a different one. Another black mark in our national book of shame.

How awful. Canada is guilty of this, too. Not our proudest moment :(

A sad historical event, and a black mark on the soul of America for not granting entry to these people.

The ship was refused in CAnada too.

How interesting and topical.

how can you refuse refugees? Especially if you are a rich country? My country, which is very poor, accepted around one million of them in last twenty years, which is like one seventh of our whole population. And yet USA won't accept them? Tell a lot about a nation.

The Dutch author Arnon Grünberg's mother Hannelore Grünberg-Klein was one of the passengers on the St. Louis. She survived WW II...
And she wrote a book, in Dutch with an epilogue by her son Arnon, which was posthumously published this year.
Don't know whether a(ny) translation is available yet.