Fact of the Day: Western Samurai 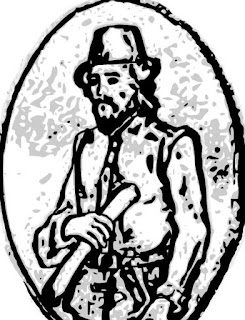 William Adams was a English sailor who was the first of his nation to reach Japan. When he arrived in Japan, most of his crew had perished on the long trip. After a little trouble, he became friends with the Shogun Ieyasu Tokugawa, and became his trusted adviser in matters concerning Europe. The Shogun liked him so much that he said that William Adams the sailor was dead and that Anjin Miura, a samurai was born. His wife in England was considered a widow when the shogun wouldn't let Adams leave Japan, and he eventually married a Japanese woman.
Posted by Adam at 12:00 AM

Email ThisBlogThis!Share to TwitterShare to FacebookShare to Pinterest
Labels: england, fact of the day, japan

Very interesting - Shogun Tokugawa and this William Adams.
Now there are strict laws regarding permanent residency in Japan.
I think from History lessons I had heard of this so curiosity
to the fore again. My God this William Adams was quite a bloke.
https://en.wikipedia.org/wiki/William_Adams_(sailor)
Anyone interested here is the link - you will be fascinated.
B J Hunnicut aka Colin
PS: I was tempted to give my "new" name Adam but thought better of it - ha ha. Didn't want anyone to stop eating scrambled eggs!!

Must of been extremely hard back then to be a navigator, you just wouldn't know what was ahead of you.

Oooooo...very cool. Just followed the Wiki link above and now, I wanna read "Shogun".
Have a great week ahead, Adam:)

Geez, that was a bit harsh not letting him go get his wife at least

Poor guy went on to become a Tom Cruise movie

Interesting story! So the shogun wouldn't let him leave, eh? Kind of a controlling friendship!

Interesting - he must have become irreplaceable!

This remember to me the movie the Last Samurai very interesting your post!
xx

Oh wow! You got a new blog design! This is an interesting story! It must have been sad for him and his wife to be separated like that.

This sounds very much like the plot of "Shogun," the blockbuster by James Clavell.

"Shogun" was presumedly based on this historical FACT.
Of course Clavell took liberties with his storyline but it is
an interesting novel based on quite a few facts - well worth reading.
If you look at the link - you will find this information.