Fact of the Day: Youngest Senator 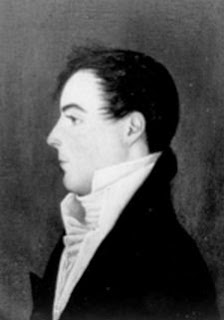 Armistead Thomson Mason was elected to the U.S. Senate (for Virginia) and served between 1816-1817. He was the youngest senator in U.S. history at the age of 28 despite it being unconstitutional as the Constitution declares that a candidate has to be at least 30 to become a senator.
Posted by Adam at 12:00 AM

Email ThisBlogThis!Share to TwitterShare to FacebookShare to Pinterest
Labels: fact of the day, Virginia

Interesting young fellow - I looked him up.
For such a young bloke he certainly had an opinion
about himself.
Pity his duelling talents were unsuccessful in the end!
He certainly died too young.

Presently we have our youngest Minister of Parliament - only 25 years old, so age should be no disadvantage.
Here:
https://en.wikipedia.org/wiki/Wyatt_Roy

Cheers
Colin
PS: I don't think our bloke is any relation to your famous Wyatt Earp.

Yes, he was quite a young man at the time.

The only other person I've ever seen with the name "Armistead" is the gay writer Armistead Maupin who wrote the "Tales of the City" series. He's originally from the South too.

Wow, he sure wasted no time

It's inspiring when young people do great things

He only served one year? He must have filled in for someone who died in office.

sounds right! All politicians should be limited from 30 to lets say 70 tops

Isn't a street named after him in Hampton, Virginia?
Well now, THERE'S a useless little factoid rattling around in my head.
Sadly, it has a LOT of company.

That is very strange that they would let him in at such a young age. I looked him up, and the fact it was to fill a vacancy makes it slightly more understandable. Still, it's hard to see how that could happen.

Heh, and we say our current political campaigns are ugly... he had to fight several duels as a result of his later campaign? And his second cousin killed him in one--all because of politics?! Ahhh...well, interesting story!