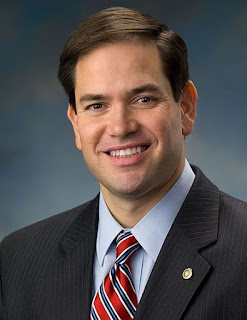 Often trailing behind Donald Trump, Ben Carson, and even Ted Cruz, GOP presidential candidate Marco Rubio has declared that he will overturn marriage equality. He says he'll do this by replacing Supreme Court justices with more "conservative" ones. Obviously every Republican will do this, but for as much as they complained about "judicial activism", and then say they'll nominate judges for just one issue makes this very ironic. Marriage equality is about civil rights, and it's ridiculous to think some politician would walk over the Constitution and un-marry countless people.
Posted by Adam at 10:54 PM

I thought in the US that Supreme Court Justices were elected for life unless they resigned due to health and other problems.
Here Australia they MUST retire at the age of 70, which seems quite sensible as some can become a little senile.
I read in today's papers here (Australia) that Ted Cruz had overtaken the unspeakable Trump???
At least whilst these Primaries are still going on, it keeps the rest of the World amused.
Are there any candidates who won't embarrass the USA, who are standing???
Trump is a cartoonist's dream here and I dare say in many other newspapers World wide. Has to be rather embarrassing for US tourists to see?
B J Hunnicut aka Colin

they are there for life until they retire. There's a couple that are very old and will most likely not be there in the next 10 years.

That's why you always have to watch politicians like hawks!

The conservatives weren't complaining about judicial activism when the court handed George W. Bush the presidency over Al Gore, who won the popular vote. Same sex marriage is now the law of the land and Republicans had better get used to it. Besides, all that talk that gay marriage would destroy America have proven to be untrue.

I say what everybody thinks: what an utter idiotic nincompoop he is! And a vile creature too! Let us hope some of his evil returns to him.

It is civil rights! The Constitution must feel a little threatened after the GOP debate tonight.!