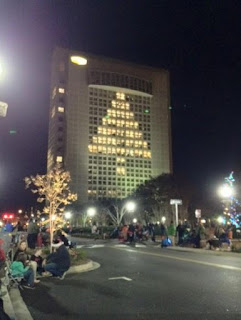 Like practically every city and town in America, my home-town of Spartanburg, SC has their own. I don't think I've ever been, even as a kid. Luckily I had time to go after work, and Daisy wasn't working that day at all. So we went downtown to see the parade. 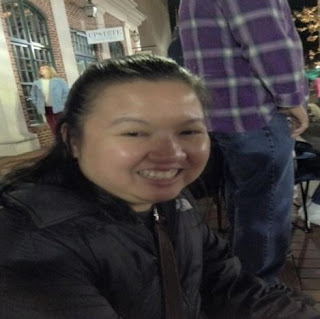 I rather wish they'd do the parade during the daytime. Daisy and I sat in our outdoor folding chairs freezing a bit. It took awhile for the parade to start, but we got some cotton candy and ate while we waited. 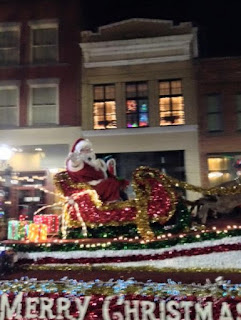 It's a decent parade that lasted much longer than the local Veterans Day parade back in November. A lot of the floats were typical. Santa, candy canes, and the religious ones. There were a few unique ones, my favorite was one based on the Wizard of Oz. Never expected that to be in a Christmas parade though.
Posted by Adam at 6:00 PM

I love parades, what fun!

Looks like a fun parade. We had one here but it was raining too hard for many people to enjoy.

Adam - what is that building in the background.
Might help me recall my "two days stranded" in Spartanburg
in relating to locality.
The USA has far more parades it seems that we do here in Australia.
B J Hunnicut aka Colin

Parades are a lot fun!

I've never been to our Christmas parade here too. And that's interesting that you guys have it at night. I've never seen that before.

It's the tallest building in spartanburg, it's the Denny's building now but before that it was BB&T for the longest time. I'm not sure if it was anything before that.

You guys get a lot of parades! We're lucky to get one or two a year here.

I guess everyone loves a parade...:)

Thanks Adam - I do recognise it, it was close to the Hotel that I stayed in - Hyatt,Marriot or Crowne Plaza.
Can't recall what one - it was in 1988.
Cheers
Colin