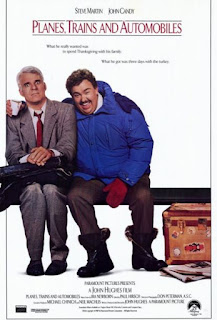 Since it came out a year before I was born, I never got to know Planes, Trains and Automobiles when it was new. While Steven Martin's prime was not during my generation, I do know who he is, and John Candy too. I heard it was a pretty good movie, and I knew I'd eventually get around to watching it. 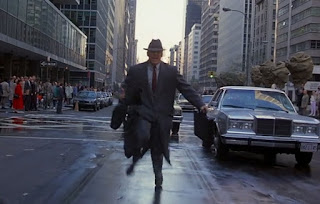 The film is about Neal Page, who is working in New York City right before Thanksgiving. He has little time before he has to get to his plane. He rushes through New York City's streets to get to the airport. With a lot of luck, he makes it there in time. But the flight can't make it to Chicago to his disappointment. 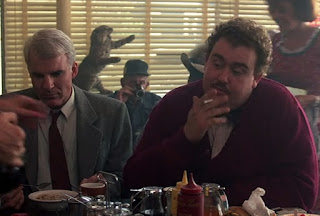 He gets stuck traveling with Del Griffith who is sweet, optimistic, but too darn annoying to tolerate for very long. They both run into a lot of bad luck which has them take every option in order to get home by the holiday. Though Neal might lose his marbles by the time their journey is over and done with. 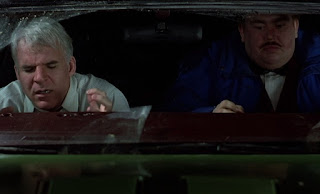 The movie wasn't quite as funny as I had hoped, but it's still a very likable film. Both characters work (or should I say not work) well with each other and provide a good number of laughs. I can certainly see why this is considered a classic instead of becoming a forgettable comedy. I don't think there are too many people who can dislike this one.

I enjoyed this movie.

I watched this movie and I think it's just okay, not what I waited from it.
Although I love both of these actors. So sad that John died too early.
http://anna-alina.blogspot.com/

It was a fun movie.

I loved John Candy. It was such a loss when he passed.

PS Hope you're enjoying your time off.

It was considered hilarious when it came out. I thoroughly
enjoyed it but John Candy's character did get a bit under my skin, but in the end you did feel a warmth for him. He just was a lonely man with really a simple heart of gold.
I saw it when it was released on the big screen and then on TV (with annoying ads). It still comes up on TV here in the non-rating part of the year - I guess the TV channels here have only a limited lot of films?? Anyhow TV channels really couldn't care less - they know that they have you glued at times.
B J Hunnicut aka Colin

I can't remember if I've seen that one but I did have a phase as a kid when I loved all Steve Martin movies ;)
Have a wonderful Christmas week, you and your sweet wife :)
Beate

Since I am obviously a lot older than you, LOL this is a truly funny movie. John Candy was one of the best and we lost him too soon. Steve Martin is another comedic actor that just keeps getting funnier as he ages. You should look up other movies with John Candy you will be glad you did. Happy Christmas to you.

I got some good laughs from this movie.

I've seen this a few times and always enjoy it. I always liked John Candy. He died much too young.

I've seen this one several times and enjoyed it. While I'm not a Steve Martin fan, I did like John Candy....

This is one of my favorite movies to watch at Thanksgiving. We watched it so often when I was a kid, I'm pretty sure I could recite it line for line.

I miss John Candy. He died way too young.