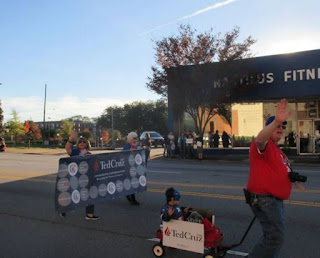 At the Veterans Day parade there was a small group of marchers who were advocating for the GOP presidential candidate Ted Cruz. They were really the only political people at the parade, but I find stuff like this to be in bad taste regardless of what party/candidate does it. Especially as some of them walked up to people on the sidewalk to say a word or two. If they had talked to me I would have told them that I only vote for presidential candidates that were born in America.
Posted by Adam at 2:00 PM

LOLZ...you Americans are so cray cray:P
PS OMG! That teaser trailer was so useless. I honestly wish I knew someone in production of this show just so that I get some hints. I can't believe we have to wait until April!!!!

It's certainly not the right place to be doing that. Pretty shameful.

I agree. It's not the time or place to be doing that.

OMG - that is bloody disgraceful.
I bet in any other democratic country in the World that would not be permitted.
In Australia - they ( Cruz or any other potential Presidential candidate or party) would be finding themselves fronting a court. Anyhow the Parade Marshalls would not let them step foot onto the Parade route.
Could someone please enlighten me on what EmmyLou is on about????
Seems that idiot Trump is getting plenty of publicity of all the wrong sorts. Do you still possess lunatic asylums in the USA??? Even your symbol, the Bald Eagle, doesn't approve of the clot.
Unbelievable report Adam. So crass that it "beggers" belief.
B J Hunnicut aka Colin

I did not realize he wasn't born here.

Since I have nothing good to say about Ted Cruz, I just won't say anything.

I agree with Stephen.

Someone should have been controlling this at parade level. If no other candidate supporters were in the parade, they shouldn't have been either.

I can't find anything nice to say, either....so...
Hi, Adam..hope all is good and you and Daisy are ready for Christmas. :)

but what if someone lived in USA for decades and dedicated their live to the country, but had the ''misfortune'' on not being born there? Why would they be less worthy to be presidents?