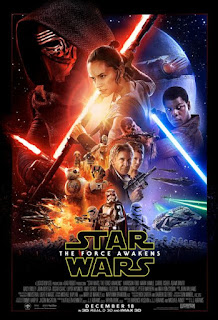 While Star Wars became one of the biggest movie series well before I was born, I remember wishing for a sequel trilogy, and I only could imagine what it would be like. The prequel films were disappointing yes, but when it was announced that J.J. Abrams would direct (instead of George Lucas)  I was relieved as he did an excellent job with the new Star Trek movies. Fans have literally waited decades for this movie, but does it live up to the hype? 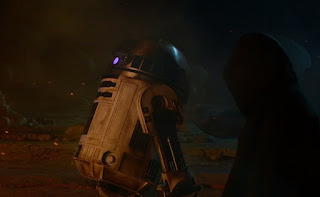 About 30 years have passed since the events of Return of the Jedi. Luke Skywalker has vanished to a far-away planet, even Leia and Han don't know where he is. The New Republic stands strong, but rising from the ashes of their old enemy comes The First Order which wants to bring back the days of the fallen Galactic Empire. Most in The First Order believe that destroying Luke Skywalker is the key, and they are searching the galaxy in the hopes to find him. 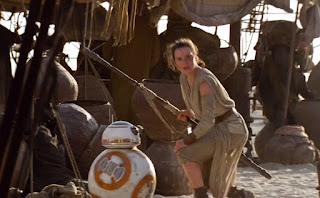 There is one clue to Luke's location, which was hid in the droid BB8. A girl named Rey finds BB8 and the droid trusts her enough to stay with her. They meet up with Finn, who was a Stormtrooper who defected after his first battle. They two eventually come across legends of the last war, and they'll need all the help they can get. 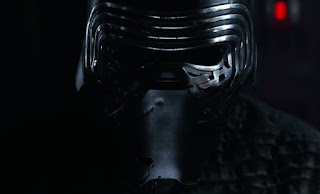 That's because Kylo Ren is after the clue that lies inside BB8. He is obsessed with facing Luke Skywalker, and taking up the legacy of the former Sith Lord Darth Vader. He wields a powerful light-saber and is extremely strong with the Force. Rey and Finn have no Jedi to train from, so can they defeat this new sinister foe? 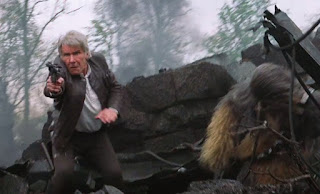 Did The Force Awakens meet my every expectation? I don't believe that's literally possible. Kylo Ren is no Darth Vader, but I really liked him but I wished they gave his story more time. Even though he's not played the character in three decades, Harrison Ford is still the man as Han Solo. I also thought Rey was a great new character, but I felt Finn was far weaker than I expected him to be. It's not the perfect movie, but I don't think that many fans will be upset.

I'll wait to read your review until after I've seen the movie.

I don't like that sort of film, not natural.

I don't like that sort of film, not natural.

I literally just saw this earlier, and I don't think I've ever cried that much in any Star Wars film. I actually loved EVERYTHING about it, and the cast was just perfection. BB8=awesome! Kylo Rey was a great villain. And yeah....I see where your GoT reference came from now:D

PS Gwendolyne as the captain was great, eh?

Thank you for this review, Adam. We plan to take my mom to see the movie. She doesn't understand English well and you gave just enough for me to explain what it's about.

Good review Adam, but I'd have to be tied to a chair with eyes
pinned open to watch it - plus these movies are so LOUD.
It had it's premiere here in Sydney this week - Harrison Ford and other members of the cast were present and I read are staying here for a summer Christmas and to watch the start of the Yachting Blue Ribbon event - the Sydney to Hobart Ocean race - something to really see - the start on Sydney Harbour and the race to be first to clear the Heads.
Naturally it is televised live on Boxing Day. Expected to be a rough trip once they clear the Sydney Heads.
I think a couple of Maxi US yachts are competing as usual.
Cheers
B J Hunnicut aka Colin
Here is the Link;
https://en.wikipedia.org/wiki/Sydney_to_Hobart_Yacht_Race

It must be good if you gave it an A. We are planning to see it soon because my husband is a fan.

The only Star War film I've ever seen was the original back in the 70's. Don't think I'll watch this one as I'm not a fan.

My husband and I will probably see this.

I loved the original SW...and then I saw one with the funny looking creature with the long ears...I liked it, too. Hoping to see this new one altho, with Mr. Ford, I doubt I like it as much as the first one....:)

My brother is so crazy about it and told me he cried in a certain part. :)

Harrison Ford - very interesting to read on Wiki.
Life long DEMOCRAT, friend of the Clintons, and an advocate for stricter "gun control laws" in the USA!
Seems to me to be VERY sensible to normal people.
I hope he enjoys his holiday in Australia.
B J Hunnicut aka Colin

I haven't ever seen a Star Wars film, but after hearing such great things about this one, I am intrigued. I may have to rent it when it's out on dvd.