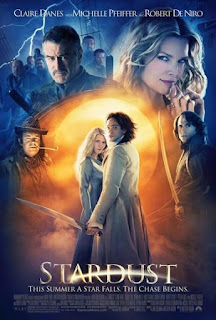 I had never heard of Stardust when it came out in theaters in 2007. I had heard it was good but I wasn't quite sure how good it was. I also had not really a clue what the plot was really about. It's very creative, so that's not surprising. It's one of those movies that comes along every few years. It was based on a 1999 novel of the same name. 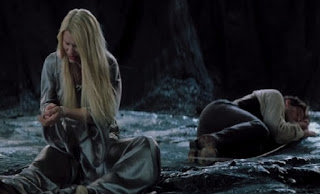 The plot begins shortly before the birth of Tristan Thorn. His father Dunstan had crossed over into another reality with a world full of magic. Tristan wants to marry a pretty girl named Victoria, and promises her he'll get a fallen star they saw in the sky. He crosses over to the same realm that his father did, and finds out that the fallen star is a gorgeous woman named Yvaine. 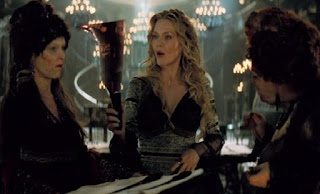 Tristan wasn't the only person to notice Yvaine's fall to Earth. A witch named Lamia wants her heart as it has the power to restore her youth for countless years. A group of princes want her power in a dispute of which one of them will be the next King of Stormhold. It will be up to Tristan to protect Yvaine from harm. 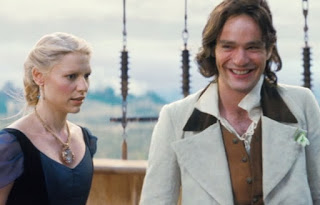 While it starts off rather slow, I was really impressed by Stardust. The dark humor and jokes are very funny, but it takes itself serious enough when it needs to be. I also really enjoyed the love-story in the movie, and the part about Tristan's mother. Robert De Niro was also excellent as the odd but likable Captain Shakespeare.

I've seen this movie several times:) I like it, and I heard the book is pretty good as well:) It's probably the only movie where I like Claire Danes:P

Haven't heard about it, but looks so interesting. I need to watch it!

I remember that one as vaguely weird. Danes is no princess, Michelle was weird as witch and I've no idea how De Niro ended up there

never heard of it - but the cast list is impressive.

I love this movie! I don't buy movies often, but I did add this one to my collection.

i may need to see this again, since it's been years, but i didn't like it the way i expected to. i had such high expectations for the amazing claire danes of my so-called life. michelle (i can't spell her last name, & don't feel like looking it up), she was a scary witch if i remember correctly.