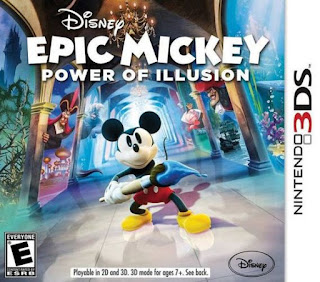 I remember when the original Epic Mickey came out for the Wii. I never got it but I heard it was good. I saw the 3DS sequel for next-to-nothing and got it. I was suprised it was in 2D instead of 3D. Though I sorta remember the Sega Mickey Mouse games being good enough. 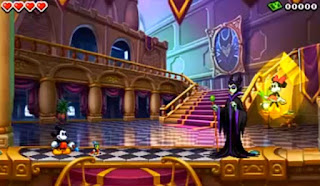 I didn't really care for the story. It's about a witch who uses magic to create faux-Disney villains for Mickey to battle against in order to save Minnie Mouse. He also has to find other Disney heroes who had been trapped by magic. 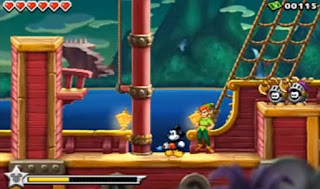 The 2D platforming is decent enough, but Mickey has a magic paintbrush that he can either create or destroy certain objects with. It's a novel idea at first, but it's get's very annoying. It didn't take me long to get sick of it.
Posted by Adam at 6:45 PM

Looks like a nice game, just as those I used to play when I was little, but Mickey is not my type. I loved Sony though! :))

Yeah I heard the first was good. I didn't know they made a sequel though

I hate it too.

It remembers me my Mickey Mouse game on Game Boy, it was a great game !