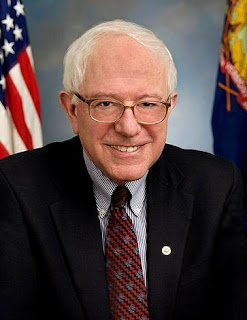 While it's not the first time he's talked about, it seems to be the first time in the presidential campaign that he's made it a major issue. Every 1st world country except the United States has universal health care, and Medicare For All would put us on par with the rest of the free world. Conservatives have gone back to the argument of "I don't want higher taxes", but our government spending is far more than countries that do have universal health care because we let things get out of control in the health care industry. I remember hearing Bill O'Reilly claim he'd move to Ireland if Sanders becomes president. I hope ol' Bill enjoys his universal health care there.
Posted by Adam at 12:00 PM

I need to do more reading on it. I did read that it would lower costs for government, individuals, and businesses.

Universal health care AND the chance to get rid of Bill O'Reilly? BONUS!

We're happy with our universal healthcare. No complaints here.

Works very well here in Australia. There are "checks" to stop the abuse of the system and if caught - well you would be very sick with the implications and penalities.
All Free World countries have some form of health care for their citizens. If this Bill O'Reilly fellow had one iota of a brain cell, then by moving to Ireland he would find Ireland has a very good health care system - what a bloody dope he is.
Actually I'd feed this O'Reilly to the ocras - ha ha.
God they would have a field day tossing him around before ripping him to threads.
B J Hunnicut aka Colin
If this

It is certainly a good thing!