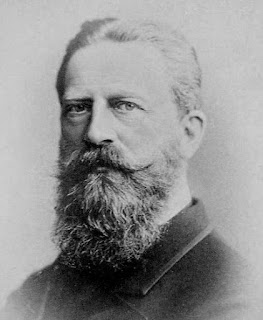 German Emperor Frederick III was married to the daughter of Queen Victoria. Much like Queen Victoria's husband Albert, both Fredrick and his wife were far more liberal than the current German leadership that preceded him. He opposed the more conservative Otto von Bismarck even as a prince, and planned to implement massive reforms to the German political system. However he died less than a year after becoming Emperor and his son Wilhelm II did not care to finish his father's dreams.
Posted by Adam at 12:00 AM

Email ThisBlogThis!Share to TwitterShare to FacebookShare to Pinterest
Labels: fact of the day, germany, queen victoria

World History may have changed if Frederick lll and his consort, Empress Victoria - eldest daughter of Queen Victoria and Prince Albert of Saxe-Coburg und Gotha, had lived a far longer life.
I can only hope Adam that your readers/followers have studied in Modern History this era??? Hope live eternally.
Good to see an aspect of historical importance so early in 2016. Keep up the good work, Adam.
Cheers
B J Hunnicut aka Colin
PS: I suggest you see this movie - starring Dustin Hoffman and Judi Dench (2014) - "Roald Dahl's Esio Trot".
It is a classic. Re-organise the "Esio Trot". ha ha.

If Frederick lived into his 90's as did his father, Wilhelm 1 (91 yrs), and his wife's mother, Queen Victoria (82 yrs), there would have been most unlikely no WW1 and so on good assumptions - no WW2.
I wonder what the World of today would have been like??
Think about that???
B J Hunnicut aka Colin

I watched recently a bit of a documentary that contained a little of this..

This part of history can be really interesting

Very interesting...
seeing his name reminds me that my grandmother was expecting my mama when her brother, Frederick, went off to war. She promised him that no matter if it was a boy or girl, she would name her baby after him. My mama's name was HELEN FREDERICK JACKSON... i am very proud of my grandmother for keeping her promise..and I never got to meet her as she died before I was born.
I hope you and Daisy had a wonderful Christmas and New Year and that this new one brings you much happiness. xo

Ain't that the truth?

Such is the way life goes.