Fact of the Day: Garfield Election 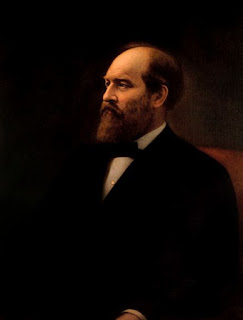 In 1880, James Garfield faced Winfield Scott Hancock in the presidential election. Garfield defeated him by a large margin with 214 electoral votes to 155. However the popular vote was the closest in American history. Less than 1900 votes made up the gap, though Garfield won the popular vote as well.
Posted by Adam at 12:00 AM

Email ThisBlogThis!Share to TwitterShare to FacebookShare to Pinterest
Labels: democrat, fact of the day, James A. Garfield, politics, republican

Very interesting President if only for 6 months - assassinated.
Well worth viewers to "Wiki" this man - he may have become a very good President - well worth more than the above can write:
"He's the Man" - well he certainly from the photo Lux G. doesn't look like a woman!!!
B J Hunnicut aka Colin

wow, what a close race!

What interesting times it must have been back then. Greetings!

That was rather close. Wonder did they have to do a recount way back then..

Must admit I don't know much about Garfield. That's very cool to know:)

Close, but still the winner, all that mattered to him I bet.

Wow, those must have been some strategically placed popular votes!

I enjoy reading elections results, especially those of close elections.

I remember studying about him in high school.

Wow, that is a very close popular vote. I wonder how the electoral college ended up with such a wide margin.