Fact of the Day: George Kings 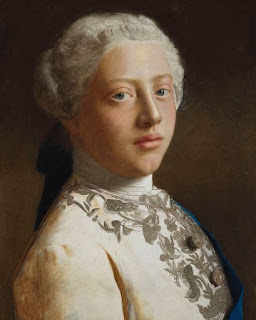 The British king George II disliked his own son Prince Frederick so much that he didn't spend much time with his own grandchildren. When the Prince of Wales died before the King, he took far more greater interest in his grandson who he quickly made the new Prince of Wales. He would take the throne as King George III when George II died.
Posted by Adam at 12:00 AM

Ouch...that is sad to dislike one's own child!

Presently on our SBS channel here - which has excellent shows on history and international TV news with sub-titles, we are having a series on "Queen Victoria's Children" - a three part series. She dominated her children especially after her beloved, Albert, died at the age of 49.
You, Adam, did a blog on Frederick of Prussia who the first born daughter married. Old Queen Victoria was aghast when told that her daughter, Victoria of Prussia, breast fed her children. "That was only what cows did" !!!!
All Queen Victoria's child had "wet nurses" !!!
Then to be on a par with her first born she had her Prime Minister give her the title of "Empress of India", after Frederick became Emperor and Victoria his Empress.
Talk about a conniving and unloving mother, Ole Good Queen Victoria was a champion.
If any reader wants a shock of what the English establishment were like - get this DVD. It will knock your socks off.
Obviously George 11, had no idea how hopeless his grand kid George 111 would be.
Really the most dis-functional family in the World, on a par with Emperor Nero!
I can hardly wait - for next Tuesday to see how she treated her sons!
I strongly recommend this series to all for a history lesson.
Cheers
B J Hunnicut aka Colin

It's very strange and sad!

Has to be pretty bad not to like one's child, unless one's child wanted to assume the throne by killing his father.

I know Victoria disliked her oldest son, the future King Edward VII and held him responsible for Prince Albert's death, but I didn't know about George II and his dislike of his son.

Oh, that's sad. I wonder what the problem was with his son.

Go to a INFORMATION BLOG - Wiki will do and READ!
B J Hunnicut aka Colin