Fact of the Day: Governor Lewis 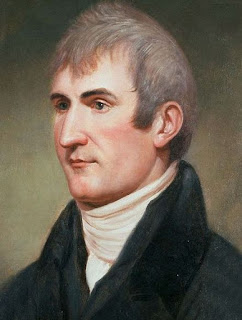 Since Meriweather Lewis had co-led the Lewis and Clark Expedition, Thomas Jefferson later made him Governor of the Louisiana Territory. Despite the name, most of the land he was Governor of was not even near modern-day Louisiana. Most of the important areas of the territory later became known as the state of Missouri.
Posted by Adam at 12:00 AM

No surprise with this geographical mistake - not much of the USA had been opened in the days of President Jefferson and after all the French were still at large as colonial former
rulers of the bottom half of the USA.
Lousiana was once FRENCH. It was on Dec 20th 1803 that the US flag was raised in New Orleans when France sold the territory to the USA. Jefferson was the then President.
Very good historical blog, Adam.
B J Hunnicut aka Colin

Bet they wish they had google maps back then lol

I didn't know that, and I thought I knew all about him since I made a rap song about him and sacajawaya (sp?). Lol!!

Oh that is very interesting. I didn't know that either.