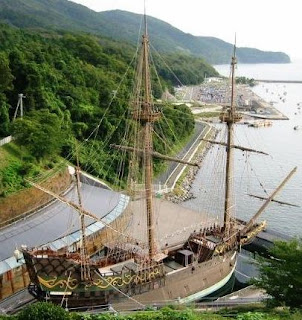 In 1613 Japan had built a ship called the Date Maru, which was the first Japanese-built ship to resemble a European one. The ship was made to resemble the Spanish galleon ships. Spain had eventually gotten the ship and re-named it the San Juan Bautista which is Spanish for "John the Baptist".
Posted by Adam at 12:00 AM

Email ThisBlogThis!Share to TwitterShare to FacebookShare to Pinterest
Labels: fact of the day, japan, Spain

The Japanese are really brilliant in ship building.
We, here, will probably be buying their submarine designs for our fleet - built here in Adelaide at the Naval Yards with Australian modifications.
The other candidates are: Spain and Germany.
Oh God dear 'dj' of Texas will have Trump, Cruz or little "Jebbie" Bush bombing us if successful - Not likely - there are sensible voters in the USA - come November 2016???
With Trump - already a vote in the UK House of Commons as to whether he will be allowed to visit and the rest of the World will be watching WITH interest.
Trump's Mexican wall won't be necessary - the World will build it for him. Enjoy your overseas holidays whilst you can.
With Trump as President - visas may be refused.
The Caribbean, Hawaii, American Somoa, the Marianas (Guam etc) and Alaska cruises don't count. Many don't even get off the cruiser liner!
Interesting historical blog.
B J Hunnicut aka Colin

I didn't know that Adam, I'm always learning which is good :)

Let's spain get a ship without doing the work

I've always loved the look of these Spanish galleons. Man....the Japanese can do anything!

I didn't know that. Interesting!

I really do enjoy all the facts you write about. This one is very interesting.

Have a great week,
-Kati

Cool, I am all for anything Japanese!

Fascinating, Adam. Thanks for sharing.

Interesting fact! Thanks for sharing.