Fact of the Day: Scandinavian Christianity 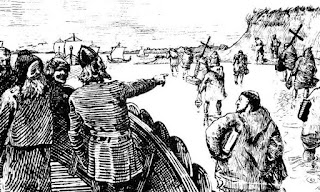 While the majority of Europe eventually accepted Christianity, Scandinavia showed a great resistance in giving up their old gods. King Haakon of Norway was raised in England as a Christian, and attempted to spread his religion among his people with little success. His de facto successor Haakon Sigurdsson sent missionaries back to the King of Denmark. The Sami people of the northern parts of Scandinavia did not convert until the 18th century.
Posted by Adam at 12:00 AM

Now Christianity and in Norway, the Church of Norway is the major religion - Lutheran faith.
The cathedrals in the Scandinavian capitals are quite beautiful
edifices.
B J Hunnicut aka Colin

I didn't know.
Thanks.
www.rsrue.blogspot.com

It's always interesting to learn something new about Scandinavian countries! Wish to visit them one day!

Too bad they didn't resist a little harder.