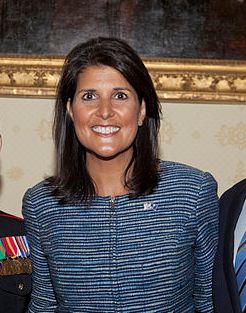 The governor of my state (SC) Nikki Haley is apparently trying to become the running mate for the GOP nominee, as she can't be governor again but wanted to give the official Republican response to President Obama's state of the union address. At a recent event, she was quoted in saying "We've never, in the history of this country, passed any laws or done anything based on race or religion" and you don't have to be a history major to realize how laughably inaccurate that is. She's governor of South Carolina for crying out loud, did she think Jim Crow laws were made for the welfare of ravens?
Posted by Adam at 12:12 AM

Ha ha. Am I surprised no. And she has such lovely teeth!
I reckon she'd be just like "ASHTON" Main in the US civil
war saga, pre-then war-then post.
Come to think of it she looks like Ashton.
God Almighty you had Sarah Palin, the Achilles heel for poor Senator McCain who must have had a "Hanoi Hilton" flashback to have selected her.
Good one Adam and I noted that Walmarts haven't changed much since my 8 visits to the USA. Thanks for that info.
Cheers and God help the US of A with this advertisement for Colgate toothpaste, Ms Nikki Haley.
B J Hunnicut aka Colin

oops - I forgot - That is "North and South" - the series with dear lovely ASHTON MAIN.
Colin

looks too young for a governor

She has an interesting background. Here:
https://en.wikipedia.org/wiki/Nikki_Haley
Colin

Nikki should have paid more attention in history class.

That is stunning ignorance worthy of . . . Sarah Palin!

I appreciate the sentiment she was trying to get across (she was speaking against discrimination against Muslims and Latinos).

However, a bit of history would have served her well.

She actually said that? Good gosh! You've got to be kidding!