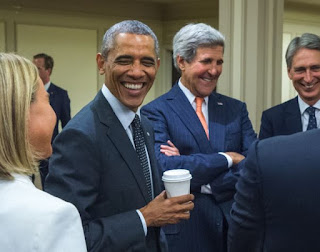 In the presidential primaries, it's not uncommon for governors, senators, and congressmen to endorse their favorites in their own party. I'm glad President Obama just recently decided to stay neutral for the Democratic primaries to let democrats decide if they want Hillary Clinton, Bernie Sanders, or Martin O'Malley as their party's nominee. Especially as many democrats like me believe that Debbie Wasserman Schultz has controlled the DNC to practically crowned Hillary Clinton as the nominee before a single democrat has voted.
Posted by Adam at 11:00 PM

I will say that I surely don't care for Schultz.

Very wise move by the President.
Maybe Ms Schultz should remember that "so-called Red Hot favourites" in horse racing parlance can come almighty croppers!
And that "cropper" has nothing to do with farming "croppers".

Hillary was hardly the best Secretary of State who has graced that eminent position - she certainly was no Cordell Hull, Dean Rusk, Christopher Warren or Madelaine Albright.

Fascinating days ahead - and isn't there a Republican debate coming up. It will be shown here on one of our TV channels.
I should think all prominent World leaders will be watching in a bemused state.
Should be amusing!
B J Hunnicut aka Colin

May the best candidate win.

I wonder what that crew could find so funny?

It'll be interesting to see what happens.

Good move by the President.