Question: Which Candidates Will Win Iowa? 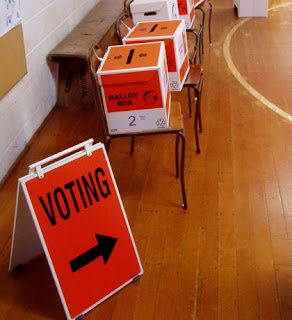 Voting for the 2016 Presidential election will start officially tomorrow as both parties will have voters in Iowa picking which candidates they want for President. Iowa is always a big deal as they are the first state to vote in a primary race. Now this question is not who you want to win, but who you think will win. On the Republican side, I'm pretty sure Donald Trump will get Iowa. It's apparently going to be a close race between Bernie Sanders and Hillary Clinton on the Democratic side, but I think Bernie will win Iowa. I'd also like to hear opinions from our friends in other countries who are keeping a watch on our elections.

Who do you think will win Iowa?
Posted by Adam at 8:51 PM

Well it is certainly on the news here in Australia.
"The Good, the Bad and the damn right Stupid".
I can assure you that even the RIGHT WING rags here are
trembling at the prospect of Donald with that button in the White House.
The best paper here in Australia - "The Nation Wide published - The Australian" seems to be giving Bernie Sanders a good chance!
Not only to beat Hilary ( now considered having excess baggage and being past the "used by date") but the one who appears to be still living on Planet Earth.
It would be interesting to see what your followers from Europe who are not "bimbos" have to say. I refer to that Dutch lady who had feet firmly planted on "Terra Firma".
Such a pity that there is no Harry S Truman like candidate.

Little Jebbie of Bush fame has been completely written off.

Now lets see the SQUAWKS of the Tea Party supporters - ha ha.
Cheers
B J Hunnicut aka Colin.
PS: Oh Adam please give my "endearing love" to "Moose luving
Sarah" and tell her that Hawaii is a state of the Union.

Jeanneke - I refer to you of Dokkum, The Netherlands (Holland). Your views from a European viewpoint.
Colin

The majority of Canadians that I talk to here are appalled at the thought of old Donald getting in. It should make for an interesting election as even the ones that are usually non political, are talking.

It should be interesting!

I like Bernie but worry he'll be a spoiler like Ralph Nader, who split the vote and gave us George Bush as president instead of Al Gore.

Well if your Texan intuition is effectively working
to it's highest level, I will take Hillary and the World Governments would take Hillary, thank you.

There will be a lot of breaking of diplomatic relations if that "clown" gets there. 1600 and Embassy row in Washington might have a few "For Sale Signs" appearing - ha ha.
B J Hunnicut aka Colin

keep us posted Adam...let's hope for the best!

Unbelievable - you live in Toronto, Canada.
Iowa is not that far south - don't you have a TV??
I can watch update here in Australia!!!
Over 20 hours flying time direct from Toronto!
Seems from the latest Cruz ( the Bible Basher) is in front and Hillary just in front of Bernie.
All polling booths have not been counted.
Toronto - the Canadian city - that is more Yankie than any other city. Oh yes, I have visited lovely Toronto!
Colin

I would have guessed Trump too...