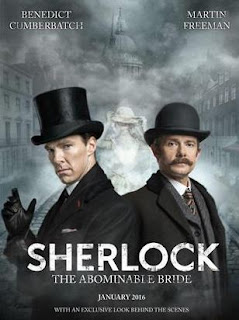 Not long ago I became a big fan of the TV series Sherlock. The series is done in the actor's "free-time" so-to-speak so we don't get a new season every year. Season four doesn't come out until 2017, so they made a special set in Victorian times (the same time-frame the original stories were set) for 2016 to make the wait more bearable. 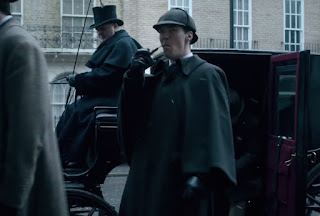 The story is set in an alternate history from the new modern Sherlock with both Sherlock and John Watson in the times where Queen Victoria sat on the throne instead of Elizabeth II. Just like the 21-st century version of himself, the 19th century Sherlock is a legendary detective who can solve virtually any mystery. 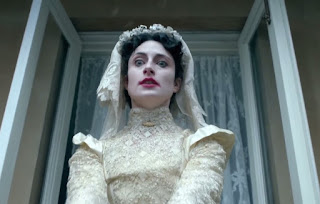 Inspector Lestrade comes to Sherlock Holmes with a strange case. A bride had ended her life in a very public murder-suicide. Not long after, her "ghost" was seen by her husband whom was murdered as well. While many think she is a vengeful ghost, Sherlock Holmes refuses to believe in the supernatural and solve the case. 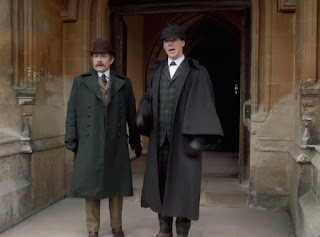 Overall I think this is the weakest of all the Sherlock episodes even though they're all long enough to be their own movies. Though I did like seeing the cast of the modernized Sherlock Holmes play the characters as they were originally intended to be. My biggest problem with the special would spoil part of the story, but I think most people will know what I'm talking about when they see it. Though I can't imagine any fan walking away from this unhappy.

I haven't seen this yet! Ack! One of my sis kept texting me when it's on at PBS but I kept missing it:( Hopefully will get to see it finally tonight, just to see the duo again.

After watching Trump "rant" to his "faithful" on TV last night, I would like Sherlock and Watson to see if they can find a brain - even of minute proportions in that thing between his ears.
At the rate this fellow is going - American tourists will be the laughing stock of the World. I really feel sorry for US tourists. The Germans wouldn't be impressed after "Trump" branded her, Hillary and Obama for ISIL?????
What next will this fellow come up with. C'mon Holmes and
Watson - "DO YOUR DUTY".
B J Hunnicut aka Colin

Sorry Angela, I shouldn't say "her".
Bad manners.
B J Hunnicut aka Colin

Ran into two Young Americans on a visit here.
He from New Orleans and She from Atlanta.
We had a drink - the alcohol type at the H.Club Bistro at the Brisbane Sofitel whilst watching the tennis on TV. I quietly ( yes with trepidation) asked them what they thought of the Tea Party and Trump, Cruz and Little Jebbie.
I wish it could have been recorded.
They were SO EMBARRASSED by Trump and the "unspeakables". Even considering migrating if the worst is to happen later this year.
Oh yes, they are loving their backpacking around my country - Australia. They fortunately have 457A working visas, so pick fruit, work here and there and IMPROVE their knowledge of life outside the 4 Square Syndrome - Seattle/Northern Maine/Key Biscayne/San Diego and back to Seattle. That is the World according to some, somehow I don't agree!!!
B J Hunnicut aka Colin