Fact of the Day: English Barbados 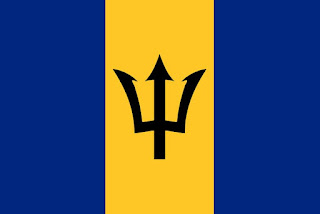 While Spain and Portugal had visited the island before, England was the first European country to establish a permanent settlement on the island of Barbados. It was claimed in the name of King James I in 1625, and stayed under British rule until its independence in 1966. Queen Elizabeth II is still technically the monarch and the ceremonial head of state.
Posted by Adam at 12:00 AM

I've visited Barbados, it is lovely there and they do speak English!

Actually I know nothing about Barbados, but heard that Rihana was born there.

That's a long time to be under its rule

A beautiful place that I hope to visit one day.

Yes, a nice place to visit.

Man, I want to go to Barbados one day!

I love this kind of information. Happy Sunday to you and Daisy.

Barbadons are mad keen cricketers and have produced two of the greats of the game - Garfield Sobers and Frank Worrell,
both held in far higher esteem in Barbados than Rihana will ever be. She is a little pygmy among the cricketing elite of Barbados. Both Sobers and Worrell have been knighted by the Queen for services to the sport of cricket. So they are both "Sirs" to we common Plebs, ha ha.
Australia, like Canada, has got rid of this ridiculous and snobbish custom.
An interesting fact about Barbados is the slave business - the slaves were WHITE!!! Irish troublemakers brought out as slaves in chains to work on the sugar planatations of their English (British) masters - it is all in Wikipedia if anyone wants to improve their education.
B J Hunnicut aka Colin

I hope you and Daisy are having a good Sunday

I hope they are too, "dj" but it is Monday morning here
so I hope you will wish me a lovely Monday??
But what has your comment got to do with Barbados???
As the late Pommy Comedian, Alf Garnett, would say - "you silly old moo".
B J Hunnicut aka Colin