Fact of the Day: Finnish War 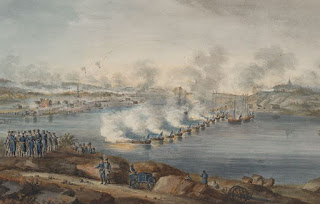 In the early 19th century, Russia and Sweden went to war in the Finnish War. Finland had long been ruled by the Swedish, so many events took place in Finland as well as Sweden. At the end of the war, Sweden lost and signed a treaty with Russia. Finland left Swedish rule and became an autonomous state of the Russian Empire until their independence in 1917.
Posted by Adam at 12:00 AM

Email ThisBlogThis!Share to TwitterShare to FacebookShare to Pinterest
Labels: fact of the day, finland, russia, sweden

I think the Soviet Russia and Finland war would be more interesting??? WW2 era, and the Finns won!
The Finns soon found out just what Lenin and then Stalin had in mind for the Finns.
Anyhow now thankfully Finland is one of the best examples of Democracy in the World, but they had to learn the hard way.
The Present state of the USA might learn a few lessons from Finland????
One of the best Health systems in the World, one of the best educational systems of the World, one of the best pensioner systems for the elderly in the World.
Taxation for the working may be high, but the benefits in retirement are most rewarding. Strange as it may seem - Finns work and don't line up for "DOLE/HANDOUT" coupons.
I reckon with the current crop of Republican candidates for 2017 Presidency - that one European country will not be welcoming the likes of Trump, Rubio, Cruz or a Bush to Helsinki!
Maybe Ohio Governor John Kasich???
And what bloody International experience has that Neuro-Surgeon got??? Overseas international medical conventions???
I doubt whether that counts - but who can tell with the "circus" of this comical circus.
I hope Australia closes the door also to any of the clowns on offer at the moment.
B J Hunnicut aka Colin ( 4.00 pm Thursday 18th)
Yes dear Americans there is an international date line.
You can leave Australia in the morning and be in LAX before you left here!!!
Of course coming back you just jump a day. One day the American confused tourists will work this out.

Sweden was quite a dominant one over there for a long time in history.

Yeah, but Russia is a hard enemy...

I didn't know this

that is something we should know as a general knowledge

Finland sure got tossed around a bit

you refreshed my memory on my history subject :D

Finland has been passed around a lot in history.