Fact of the Day: King of Hanover 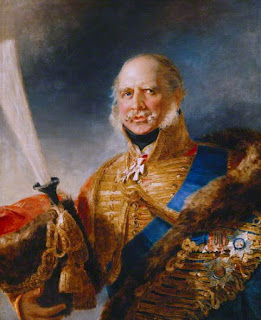 Because of the Germanic roots of all British monarchs since George I, the King of Great Britain was also King of Hanover which was a kingdom before Germany had unified. When Queen Victoria took the British throne, she had no right to Hanover's throne. As only males could become its ruling monarch, King George III"s fifth son Ernest Augustus became monarch instead.
Posted by Adam at 12:00 AM

If anyone can fathom out this Royal House of Hanover and the descendants they should be nominated for the Nobel Prize in Ancestry - they are all over the place these days - even related by marriage to the Monte Carlo rulers - via: Caroline. She is married to one. So I guess that brings in also the Kelly family of the USA!

Something akin to an octopus - tentacles in all Royal Households of Europe - existing and the dormant ones.
B J Hunnicut aka Colin

Another place that women are outlawed. Hmph

That's a long way down the lineage line

Did not know this. Thanks, Adam!
Have a great one.

never knew for sure. looks deep.

So Hanover had "Salic" Law? I've never thought about it.