Fact of the Day: Princess of Wales 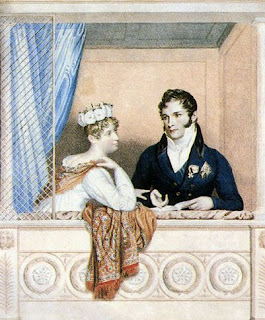 Princess Charlotte of Wales was King George III's eldest legitimate grandchild. While her father wasn't George IV yet, he ruled as regent as George III had eventually became insane. She died shortly after giving birth to a still-born son. Had she outlived both George III and her father George IV she would have become Queen of Great Britain. The role passed to George IV"s younger brother who became William IV.
Posted by Adam at 12:00 AM

Interesting how the 'line' falls in royalty. Wonder what it would be like today if she had made it to be a Queen.

Always a back up line for the royals it seems

Never heard this... Happy Valentine's Day to you and Daisy!

Way too many Georges in their royal history, counting this little one in the kindergarten

I agree. That's why I banned my cousin George from my parties.