Fact of the Day: Roman Irony 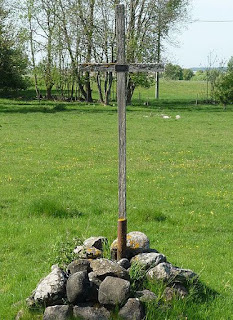 The Roman Empire had a long history of diversity of culture within its lands, though they also had many periods of religious persecution. The early Christian Church had many problems and issues with Rome before Constantine became Emperor. After Christianity was made the state religion, it didn't take too long for those who remained pagan and loyal to the old gods to be persecuted in some way.
Posted by Adam at 12:00 AM

Anyhow here for people to read more on this Emperor Constantine read 'The Edict of Milan" AD 313.
https://en.wikipedia.org/wiki/Edict_of_Milan

B J Hunnicut aka Colin

Constantine was born in my country like more than a dozen of other Roman Emperors.

That is good to know - 3 good Serbs - I wonder did he play tennis like Novak Djokovic and the glamorous Ana Ivanovic.
Ana would have made a very glamorous Empress of Rome.
Actually I think one year she did win the Italian Tennis Championships.
Cheers
Colin

And that's how such religions we have now came to power over the old gods and myths and such, brute force and scare tactics.

Reminds me of how America was found in Freedom of religion, following burning those with other views as "witches".

Jesus would have been shocked-and profoundly saddened-by the barbarity committed in His name.
Christianity isn't the only religion with such a history, of course.
That's why I'm founding "The First Non-Denominational Church of Not Being An A-Hole."

Jesus would have been shocked-and profoundly saddened-by the barbarity committed in His name.
Christianity isn't the only religion with such a history, of course.
That's why I'm founding "The First Non-Denominational Church of Not Being An A-Hole."

Some times the History is crazy Adam, really, what a mess ...

The things that have happened in history and in the name of religion is just scary.

It's terrible what people do to each other in the name of whatever they believe.

Actually, there wasn't as much persecution of Christians by Romans as you might imagine. In Rome there remains a massive monument to all religions in the Empire called The Pantheon. Records do not show Christians being thrown to lions in the Coliseum; Pope Clement VII got tired of people hauling away marble from what was being used as a quarry in Rome so he lied and claimed Christians had died there. Actually, he wanted that marble for himself.

Stephen: Pope Clement came to power a long time after Emperor Constantine and you seem to conveniently forget that the "Papal States" was/were (take your choice of either the singular or the plural) a powerful country in its' own right in this period of World History.
Kindly refrain from "nit picking", it demeans you.
B J Hunnicut aka Colin