Fact of the Day: Simo Hayha 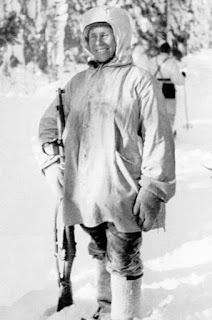 Simo Hayha was a Finnish sniper during the Winter War between Finland and the Soviet Union which also took place during World War II. The Red Army was so scared of him that they nick-named him White Death as he is believed to have killed 505 soldiers. The Soviets went to great efforts to destroy him, and they managed to severely injure him in the face. He recovered, and eventually died in 2002 at the age of 96.
Posted by Adam at 12:00 AM

Because of the snow he dressed in white.

Simo certainly could shoot and naturally the Finns were camouflaged in white - it was the Winter War, when the Soviets tried to invade Finland.

On this link you can see the damage to his face when hit.
https://en.wikipedia.org/wiki/Simo_H%C3%A4yh%C3%A4

The stupid Soviets were in ordinary military attire. Easy targets in the snow of Finland. The Soviets soon found out the folly of this attire in a winter war.
A bit of an in balance in equipment:
Soviets 6,500+ tanks v Finns 114 tanks
Soviets 3,800 aircraft v Finns 114 aircraft
Deaths: Soviets estimated - 167,000+ and Finns 25,904.
The Finns had to sue for peace and concede some territory,
but on balance I think the Finns gave Joe's boys a very bloody nose.
B J Hunnicut aka Colin
PS: Have today been improving my knowledge of a place in Texas called Luddock. Hmmmmmmmmmmm Home of that great Kenneth Copeland (Evangelist) and the second most conservative city of over 100,000 people in the USA.
Interesting indeed.

Oh I forgot one person who lives there does not like Socialists - goodness gracious!
Who could that be?
Colin

That's some outfit he's wearing. I need that for the weather here this morning. : )

Pretty cool:) I would definitely see a movie about him. I wonder if he has a biography out? Hmmmm....

OK, I'll admit my ignorance. I didn't know the Soviets tried to invade Finland. Thanks for the info. And his name? Is that a typical Finnish name? I thought it was Asian.

Interesting and they even have a photo.

Very interesting! Never had heard of him.

Wow, he was not to be screwed with.

This is really interesting! And he lived a long life.

That's quite a record for any sniper. Take care.

FUNNY????
Your comment on this matter seems to a logical person
to be somewhat WARPED.
He was defending his country from an invasion, what is so funny about that, eh?
I would suggest you leave Finland off your list for visiting - he is a hero of the country.
Like a visit of Donald "bizarre, weirdo Trump, the welcome door mat might be flung into your face.
Colin

I just looked at how badly he was wounded in his face. What an incredible person.

it is funny how easily you'd side with the country which was actually a Nazi country during WW while the Soviets died in millions to free half of Europe, Colin. The amount of superficial info and bias you emit without using the historical facts is often astounding especially since you try to present yourself as some kind of expert in these comments. Makes me sometimes feel you are either 15 years old or a very very bitter man

I am fully aware of the Pact with the Nazis.
That was not the subject.
I am sure I know a lot more history than you my good man.
The Soviet Union invaded Finland, Finland was defending their independence. The Finns did not start the Winter war of 1939/40.
So you get your facts straight before you start tinkling with computer keys.
Colin

Maybe you forgot also Dezmond that Joe Stalin and Adolf Hitler were allies until June 22nd 1941 !!!
Note when the Finns had to sue for peace with Bloody thirsty Joe - March 1940 !!!
Oh I could go on but I would not like to further your embarrassment.
Colin (72 years of age!)

Colin....we all know who is a Christian and Republican and lives in Lubbock.....wanna make something of it...???
hahhaa...you are a piece of work, Colin.
What IS it with you that you must attack people on Adam's nice blog...???