Fact of the Day: USS Stark 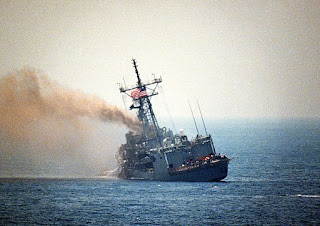 While the Iran-Iraq War was fought mostly by the two countries, other nations had supported either side in some way. While the United States had backed Iraq during the war, in 1987 an Iraqi aircraft fired missiles at the USS Stark killing 37 sailors. The USS Stark survived until she was retired in 1999 and scrapped in 2006. President Ronald Reagan later blamed Iran for the incident despite that the fact that an Iranian helicopter aided the USS Stark in rescue operations.
Posted by Adam at 12:00 AM

Email ThisBlogThis!Share to TwitterShare to FacebookShare to Pinterest
Labels: fact of the day, iran, Iraq, politics

I certainly remember this incident. I was in the US on holidays at the time. All hell was breaking out.
The US press and TV were screaming for blood.
Funny how it eventually panned out - someone had to be the
scapegoat.
https://en.wikipedia.org/wiki/USS_Stark_incident
B J Hunnicut aka Colin

Dezmond - Billions of miles away????
I don't think the US navy sail around on the Planet, Pluto - ha ha.
You've been watching too many Disney cartoons.

You probably are correct though - they had no business really being there but that little three letter word had a lot to do with it - OIL protection.
B J Hunnicut aka Colin

I was really small back then, but I do recall this.

I remember it, too

All about making the enemy they want you to hate and not the actual enemy, if there even is one.

They're my friends until they're my enemy until they become my friends again. They're all frikkin' nuts in that cesspool (I spent my fair share cutting circles in it). I'd like to see us wash our hands of the bunch of them.
The Navy did all it could to save the Stark. They didn't want all the bad press which would come from having one of our ships sunk.

I'd forgotten this incident.