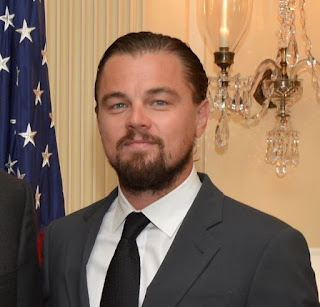 While I used to resent him merely because how girls my age would swoon over him ever since Titanic, as I aged I started to respect him a lot as an actor. While nominated a few times, he never had an Oscar before 2016. But now he's gotten his first for his role in the movie The Revenant, which I haven't seen but plan on to. I also appreciated after he got done thanking his friends, colleagues, and family, he used the time left to address the issue of climate change with the millions watching. You know it's a serious issue when they had to move the filming of The Revenant because Canada was too warm and didn't have enough snow.
Posted by Adam at 8:00 PM

I am glad he won an Oscar at last!

I loved that he made a statement about the environment and then left the oscars in his private jet....hahaha.

Adam, I'm one of those long-time Leo fan because of Titanic...hehe...but seriously, not only is he a great actor, but the fact that he uses his fame for something meaningful is really to be admired.

He has become a very sensible person with a lot to offer besides having the "fair femmes/sex" all go 'ga ga' over him
since his "Titanic" days.
He has become a regular visitor to Australia and his visits have been low profile but what he says on the environment is certainly listened to, plus other causes that he and his wife, champion.
He just doesn't open his mouth without thinking.
A credit to him as a man, an actor and to the USA.
Certainly unlike a certain Mr. Johnny Depp and his wife, who still face the "infamous" dog stunt here and will be facing the courts here I believe this month, and as we have an extradition agreement with the USA on criminal
(breaking importation regulations) activities, they better front up or else. Australia is one of the few countries that is rabies free and dogs can carry rabies. Tut tut - naughty people Mr and Mrs. Depp.
B J Hunnicut aka Colin

I haven't seen this movie but so far i haven't been impressed with his acting.

I've like a few of his movies, but I don't go gaga or swoon over him.

He deserved an Oscar for his acting. Seems a nice man.

I was really, really glad he got the Oscar for that role. It was too violent a movie for me, but you could see how he suffered for that role. I was also very happy with his acceptance speech. It was very well said.

Hello Adam!:) I was also very impressed with his acceptance speech. He's a geat actor,... whichever role he plays he makes it believable, and memorable. I have seen Reverant, and althoug I thought some of the scnes were over long, it is a very good film.

I'm glad he finally won so the hype is over.

It's really nice that he finally won!

I applaud him for speaking out about climate change but unfortunately, he got his facts mixed up about the sudden blast of warm weather which melted the snow near Calgary when he was there filming. That's simply a weather phenomenon called a "chinook" which occurs all the time around Calgary. They can go from -20 to +20 on the same day. Everyone in Canada envies Calgary's chinooks.