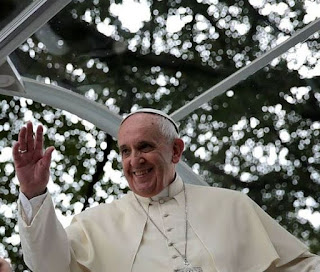 While in Mexico, Pope Francis called Donald Trump's stance on immigration "not Christian", which many on the right-wing consider rude for questioning a man's faith (except when that man is President Obama of course) like that. In the Pope's own words he said "A person who thinks only about building walls, wherever they may be, and not building bridges, is not Christian. This is not the gospel" recently. I think Pope Francis does have a solid argument. While I'm not Catholic or any kind of Christian, I do find it hypocritical of right-wing Christians to be extremely against immigration. They didn't want Syrian refugees because they were Muslim, but most Hispanics are Christian so what's the major argument other than racism? Something which does contradict the whole "love thy neighbor" thing doesn't it?
Posted by Adam at 7:52 PM

Two things I do not discuss with others, religion or politics.

I wondered Adam when you'd grab hold of this delightful, bigoted from the Republican side business?
Yes Adam - the Cuidad Juarez and the El Paso (Stadium) crowd in TEXAS, was given quite a coverage here on TV news and the Murdock Press, I never looked at what our Fairfax Press had to write??
I reckon Pope Francis would be able to interpret the words/meanings of the bible far more correctly than the US Bible Study Classes!
It seems that Pope Francis just ignored the "rantings" of Trump and Co.
Strange when you take a sporting look at this - the US Champion golfer is Jordan Speith, a Texan and God forbid, educated by the Jesuits and also has been a welcomed pilgrim to the study of Pope Francis!!!
I would love to know the thoughts of young Jordan???

Your final summation is spot on Adam - well done.

If little "Jebbie Boy" plays his cards right ( not likely, he being a Bush) as I believe he is married to a lady with an Hispanic Background and has coverted "supposedly" to the Catholic faith, the "Address and Mass" on the Mexican/Texan border could play dividends????
B J Hunnicut aka Colin
PS: And I think regular readers know where I was educated and by whom??? ha ha.

Very sensible LV - religion can become "a can of worms".
Colin

I agree with you Adam.
From what we hear of Trump speaking our TV, the things he says, heaven help him.

Good one Margaret but I can't see "Heaven" helping Trump and Co, lets hope Heaven helps the rest of the World from the "inanities" free flowing in the Republican Presidential race.
Colin

Conservatives love to say their Christian faith is important while disregarding everything Jesus stood for.

Interesting that Trump came back swinging saying the Pope had no business criticizing his being a Christian... and yet... I also saw Trump saying this:
"I've never seen anybody that lied as much as Ted Cruz"... "And he goes around saying he's a Christian. I don't know, you're going to have to really study that.”

Trump is a bully.

I wasn't expecting a Trump vs. the Pope match but given that Trump has battled McCain and Fox News, it's not a surprise!

Doesn't pope live in a walled/off city of Vatican? Surrounded by enough gold to feed the whole galaxy? :)
Can't stand either pope nor that idiotic Trump.