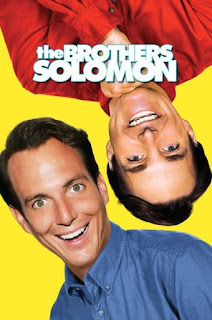 I remember when The Brothers Solomon came out in theaters in 2007. It seemed like a goofy movie though I never saw it back then, and I was little shocked of how badly it did with both critics and regular folks. Not many people really wanted to see the movie, and even less liked it. Richard Roeper (from At the Movies with Ebert and Roeper) apparently hated the movie so much he walked out of it, citing it as the first movie for him to do so. But The Brothers Solomon couldn't possibly be that terrible? Could it? 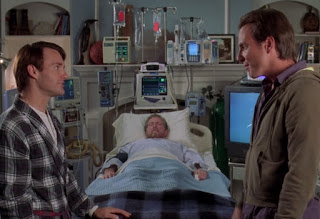 When two brothers named John and Dean Solomon's dad goes into a coma, they get depressed. Their dad sacrificed so much for their sake after the death of their mother, and now their helpless in his time of need. They hear the idea that coma patients might live longer if they have something to look forward to. The brothers decide that a grand-baby would be the perfect idea. Except, neither of them is married, and they can't manage to land a 2nd date with a woman. 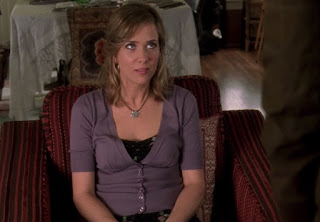 They end up meeting a woman named Janine Rice. She doesn't want the baby, and is willing to carry one by artificial insemination as she does not want to date either Solomon. The brothers are excited for the new baby, but show how childish they really act. Janine starts to doubt if either one of them could be even a decent parent. They also have to take care of their dad when he leaves the hospital (though he's still in a coma) but are helped by a neighbor named Tara Anderson. Whom John has a massive crush on to her annoyance. 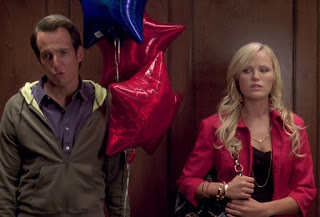 Yes The Brothers Solomon is a massive failure of a film. I know Will Arnett and Kristen Wiig can be in funny film and TV shows, so what went wrong? I blame a terrible script written by Will Forte who also plays Dean Solomon. The movie is just too ridiculous for its own good, and while it has potential for funny moments, it rarely (if ever) makes you laugh. A lot of comedies never do well with critics such as Dumb and Dumber. Were they trying to be the next Dumb and Dumber here? Because all they were here was just dumb.

Hahaha. I haven't heard of this one before

Never heard of it.