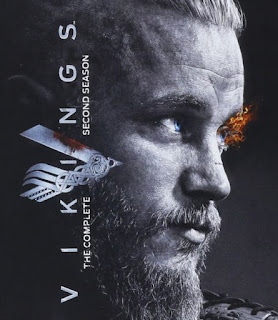 I started Vikings late last year, but I liked it well enough. Though it wasn't quite as good as I had hoped. The 2nd season sees many changes for Ragnar Lothbrok, his wife and son, his brother Rollo, and all of his friends. Not only does life change in Scandinavia, but England will see much drama when the vikings return. 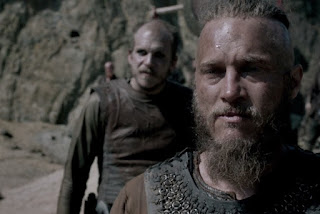 The story begins with King Horik and Jarl Borg at war with each other. Ragnar leads the fight for Horik, while Rollo has betrayed Ragnar and fights with Jarl Borg. The two Scandinavian royals have their petty politics to settle out. Which leaves Ragnar to face a few difficult choices. One includes the issue of Princess Aslaug coming to his village carrying his child in her womb. Which will greatly anger his wife and son Bjorn.

Ragnar will eventually return back to England. Instead of arriving in Northumbria, they arrive in a new kingdom. The leader of the land is King Ecbert, who is much like Ragnar. He's intelligent and very curious about the vikings. He's not totally against them like King Aelle, but has far greater plans which may be good or bad for the viking warriors. 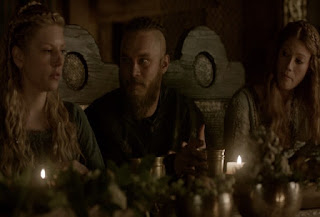 The 2nd season of Vikings isn't much different in quality than the first. It has an interesting story and characters, but it never gets good enough where you can't stop watching. I liked their visits to England, and Ragnar's royal problems, but I think one of the problems the show has is there aren't many major deaths to it. Against all odds, pretty much everyone that matters to Ragnar will escape death even as it seems all hope is lost. So it does turn down the epicness of a battle or fight with any of the characters.

If major death is your criterion, then you'll like Season 3 better then. But get Season 3 under your belt quick because Season 4 starts on the History channel next week!

I didn't want to watch because I knew it would be bloody, but I did get caught up with it and have watched all the episodes.

I have been recommended Vikings by a whole heap of friends. But, so much else to watch too!

My dad LOVES this show!