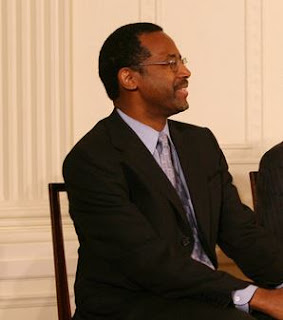 GOP presidential candidate Ben Carson apparently sees "no political path forward" for his campaign after an extremely weak showing after yesterday's Super Tuesday primaries. Funny if he became president, "no path forward" does seem to be what his policy would have been. Carson seems to be 2016's Herman Cain, an African American politician so far-right crazy that he won the heart of Republicans who want to prove they're "not racist". I will agree with some Republicans that claimed he "shattered perceptions", except it's actually the precipitation that brain surgeons are smart. I honestly wonder if the last surgery he ever did was a lobotomy on himself. It would honestly explain why he thinks the Egyptian pyramids were actually Biblical grain silos.
Posted by Adam at 10:00 PM

Oh you have a fine sense of humour, Adam.
Bright no doubt he was in his profession as a surgeon,
but as for political experience - ZILCH.
Good idea for him to 'pull out'.
But still TRUMP????????????????????
Let us hope sense will eventually prevail with the
intelligent going to the polls when this circus finally is over.

B J Hunnicut aka Colin

I almost forgotten that he is even there 3 days prior to his announcement, I haven't hear any news channel mention his name, all they play over and over again on TV is Trump's bing bing bing calling little Marco and Marco saying how small Trump's hands are.

He should have used that as his campaign theme, with bumper stickers and so forth. he probably would have won.

He really needed to leave because he just wasn't able to get a momentum going for him. He also had a credibility issue since he made up things about his background.

A lobotomy on himself...oh that is too funny.

I think Conservatives like to include people like Carson who don't have a chance of getting their party's nomination to hide their racism.